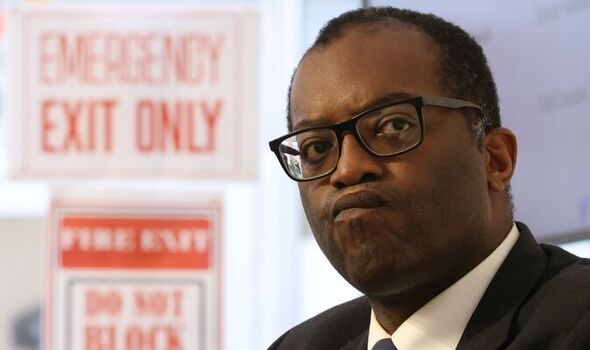 Analysts have reacted after Prime Minister Liz Truss sacked Chancellor Kwasi Kwarteng. The Chancellor flew back early from International Monetary Fund talks in Washington today to be informed of his fate in a brief meeting with the Prime Minister.

Ms Truss will stage a press conference in Downing Street later today in which she is expected to announce major changes to Mr Kwarteng’s £43billion tax giveaway.

Susannah Streeter of broker Hargreaves Lansdown said: “Amid the wait for the wheels to screech on another U-turn, the door to no. 11 Downing Street is already groaning on its hinges with Kwasi Kwarteng exiting the Treasury.

“The finger of Government blame was pointing straight at the Chancellor as soon as he was ordered to dash back to from the US a day early. His promise of a medium-term fiscal plan to be delivered on Halloween did not provide enough reassurance that the Government was in control of economic policy and investors showed signs of taking fright again.

“But Liz Truss is still facing a rocky horror show of her own making, given the UK is still hurtling back into a 1970s time warp.

“Even if this embarrassing reshuffle is accompanied with a fresh reversal of policy, as far as the credibility of the Government is concerned, significant damage has been done.

“There will be a long way to go and significant bridge-building ahead before the UK risk premium disappears.”

Ms Streeter said the cost of Government borrowing fell further earlier today with gilt yields dropping as speculation swirled there would be a change at the Treasury, an indication that investors in the UK might welcome this change to the front seat line up.

She added: “But since his departure was made clear, 10-year gilt yields have edged up slightly and the pound is flat-lining around $1.12, with no fresh euphoria in sight as markets digest another bout of political upheaval.

“For now the Prime Minister has won breathing space, but the financial markets are highly sensitive and anything less than a co-operative approach with the Bank of England, the Office of Budget Responsibility and international institutions could cause fresh instability.”

Citi economist Benjamin Nabarro said the key issue in the near term is the contradiction between monetary and fiscal policy.

He added: “This is driving up rates expectations, worsening the fiscal fundamentals. It is also weighing on UK institutional credibility.”

Shadow Chancellor Rachel Reeves said: “This humiliating U-turn is necessary – but the real damage has already been done. This is a Tory crisis, made in Downing Street. It won’t be forgiven or forgotten.”

He said: “All credit to Bailey of the Bank whose Friday deadline has forced the Government to adopt a more orthodox economic policy and thus restore order to the markets.”

Mr Bailey had signalled earlier this week that a £65billion bond-buying round aimed at propping up pension funds would end today (October 14).

The Bank had been forced to step in two weeks ago to calm the gilt markets by promising to buy billions of pounds worth of gilts from those who want to sell them. The chaos had been sparked by the Chancellor’s tax-cutting package and worries over how the Government would fund it

“It’s been three decades since James Carville longed to be reincarnated as the bond market such was its power to bully and belittle the elected class but gilt investors have just bared their teeth and reminded us why the Ragin’ Cajun felt that way.”

Just before midday, sterling, which surged two percent on Thursday on reports of the Government’s mini-budget U-turn, fell 0.7 percent to $1.125.

Chris Beauchamp, Chief Market Analyst at IG Group, said: “Kwarteng’s removal as chancellor, making him one of the shortest holders of that office, hasn’t done much to boost the pound, given that it has already rallied yesterday on hopes of a U-turn on the budget.

“Now the market will wait to see what is actually decided, and only then will it take a view on giving the government some support in terms of another bounce in GBPUSD and/or a drop in gilt yields. Liz Truss certainly isn’t out of the woods yet.”

Mr Kwarteng said he had resigned at Ms Truss’s request after rushing back to London overnight from IMF meetings in Washington.

In his resignation letter to Ms Truss, which Mr Kwarteng published on Twitter, he said: “You have asked me to stand aside as your Chancellor. I have accepted.”

Having triggered a market rout, Ms Truss now runs the risk of bringing the Government down if she cannot find a package of public spending cuts and tax rises which can appease investors and get through any parliamentary vote in the House of Commons.

Her search for savings will be made harder by the fact the Government has been cutting departmental budgets for years.

At the same time the Conservative Party’s discipline has all but broken down with infighting.

Labour MP Chris Bryant tweeted: “If you can’t get your budget through parliament you can’t govern. This isn’t about U-turns, it’s about proper governance.”