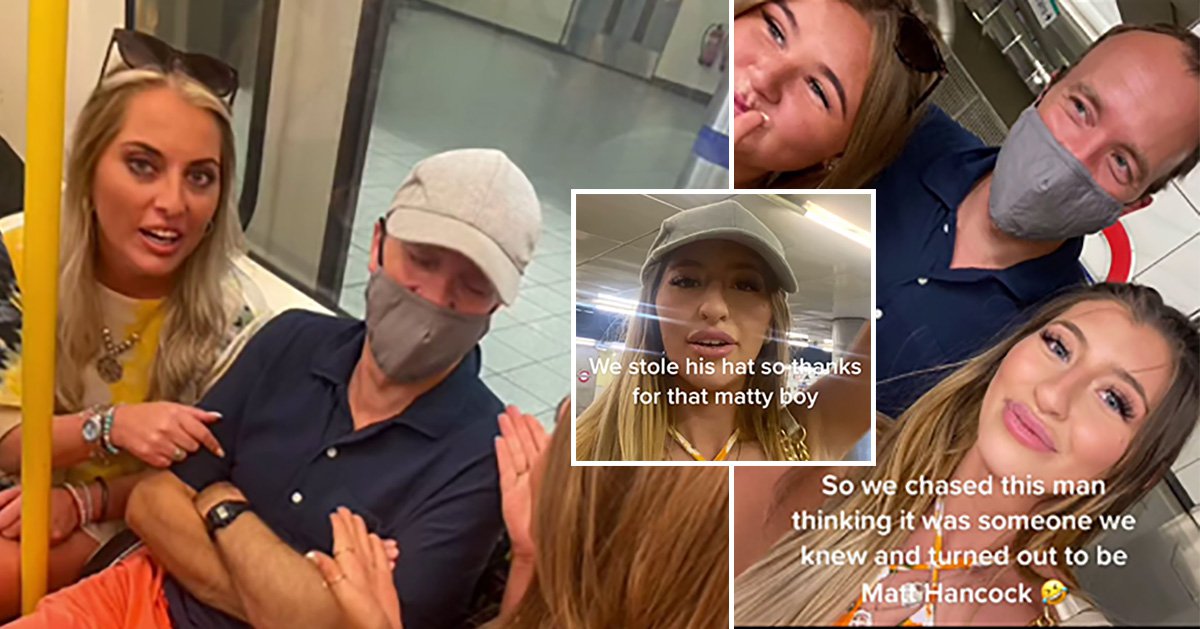 Matt Hancock became an unlikely TikTok star today as he was mobbed by a group of laughing women on the London Underground.

The disgraced former health secretary had his baseball cap stolen by a rowdy gang who sang ‘we love you Matt’ and tried to take selfies with him on the District Line.

It comes as the married politician tries to keep a low profile after being caught in a passionate cliche with aide Gina Colandangelo while households were banned from mixing indoors.

None of the women wore face masks, while one attempted to pull down Mr Hancock’s grey face covering before getting on the train.

The girls tried to get passengers singing ‘We love you Matt, we do’ as he stood holding onto the railing.

The MP for West Suffolk appeared to entertain the girls and was seen chatting and laughing.

However, he looked embarrassed and covered his face with his hand as they belted out the song.

His hat was lifted off his head several times until it was eventually lost forever as the women made off with it when they left the tube.

We meet the man himself, Matt Hancock 🤣we h*erased the poor man #matthancock #london

An onlooker told The Sun Mr Hancock looked ‘uncomfortable’ after losing his hat because ‘it left him exposed for the rest of the journey’.

Other videos were posted on TikTok by one of the women, with a caption reading: ‘So we chased this man thinking it was someone we knew but it turned out to be Matt Hancock.

‘We had a good old chat. We terrorised the poor man. We stole his hat so thanks for that matty boy.

‘The whole tube was singing, what a vibe you brought us Matt. You made our night.’

The ex-minister was spotted with his children in Cornwall last week, with wife Martha seen separately in the area.

He is said to have told Martha their marriage was over after a video of him and Ms Colandangelo kissing appeared in the media.