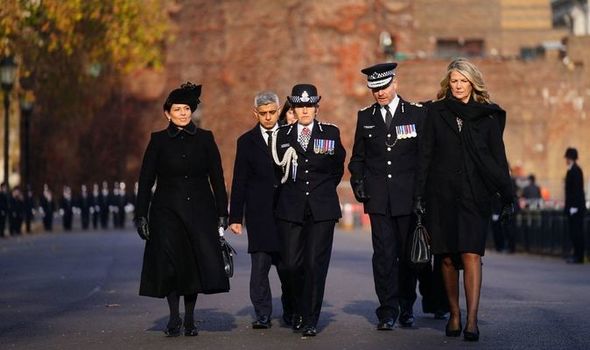 In traditional uniforms, helmets and white gloves, colleagues marched through streets near Buckingham Palace to the memorial event.

Girlfriend Su Bushby told those gathered at the Westminster service about her first meeting with Matt in 2015.

She said: “At the time I had no idea that this man was going to play such a major part in my life.

“On our first date he took me to his gym. On our first ‘proper’ date I was watching the All Blacks at London’s Olympic Stadium. A sign of things to come maybe? It was clear from the outset he was a caring, considerate, fun-loving man. His huge smile was infectious.

“He was my rock, my best friend, my partner, my confidant and my gentle giant.Then he was gone.”

Speaking before the service Chief Inspector Darren Jones said: “Matt was fantastic. It was always lighthumoured with Matt, and whenever you had to deal with a difficult situation he used that humour to try to appease the other party.

“If he could win someone over with his personality, that would always be the first port of call. That was his best asset as a police officer, his ability to talk to people and the friendliness. People couldn’t help but like him, even if they were anti-police.”

Sgt Ratana, 54, was fatally wounded at Croydon custody centre, south London, in September 2020. Louis De Zoysa, 24, has been charged with his murder.

The service replaced what would have been a full force funeral last year due to Covid curbs and was attended by Home Secretary Priti Patel,

London Mayor Sadiq Khan and Commissioner Dame Cressida Dick. Before the service, they walked with Ms Bushby and Assistant Commissioner Matt Jukes along Horse Guards Road and Birdcage Walk to the Guards’ Chapel.

The route was lined by more than 200 officers paying tribute to the New Zealand-born officer of Maori descent who moved to England in 1989. The rugbyloving head coach at East Grinstead Rugby Club, West Sussex, was planning his retirement when he was killed.

The service included hymns, readings, tributes and a Maori hymn. Dame Cressida said: “I met Matt on a number of occasions, he had a huge presence, he was a big man, he always had a smile, he was very kind. He was just a great guy, very well known.”

Before the service Sgt Martin Christianson said: “When you saw Matt Ratana’s name you thought, ‘We’re safe, it’s going to be a good day.’ He inspired people to go the extra yard, to push themselves – even me and I’m close to retirement age. He made officers and the public feel safe, purely by his presence.