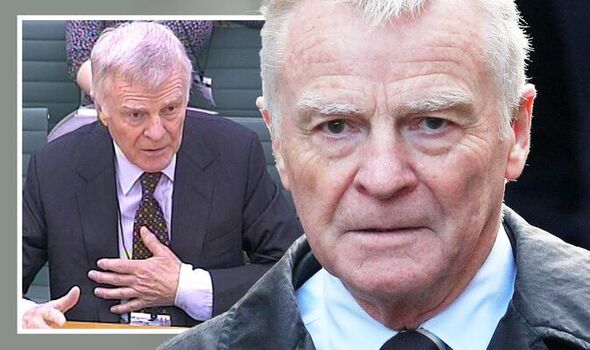 The 81-year-old was found dead with “significant injuries consistent with a gunshot wound” at his London home in May last year. Westminster Coroner’s Court today heard the father of two was receiving palliative care for lymphoma, which he was diagnosed with in 2019, at the time of his death.

On May 23, Mosley emailed his PA and gardener Henry Alexander telling him he planned to “end it all”. He is said to have had a “final dinner” with his wife Joan that evening, but was in “great pain and did not eat much”, the court heard.

The next morning, Mr Alexander texted Mosley to tell him he had his newspaper but did not receive a reply – prompting him to use the spare key and let himself in.

He found a note nailed to Mosley’s bedroom door reading: “Do not enter, call the police”.

The coroner said he had “endured a life-ending injury. It’s clear he had injuries not compatible with life”.

The death was a suicide, the coroner ruled.

Dr Rasha Al-Quarainy, a consultant in palliative care from the Central and North West London NHS Trust, told the coroner Mosley was referred to her in April last year.

Mosley was said to have had a “poor prognosis” as the B-cell Lymphoma was “inoperable”.

She said: “He was very talkative and engaging. We were there for about 45 minutes. He was very engaged and talked through quite a lot of things.”

Asked by senior coroner Dr Fiona Wilcox if he mentioned any suicidal thoughts, Dr Al-Quarainy said: “No, none at all.

“On the contrary he said that he had plans to renovate their home in Gloucestershire that wasn’t going to be finished until July. He was still seeking treatment possibly in the US, possibly in the UK, and some other matters he spoke to me about.”

She said she last spoke to him on May 4, before he was due to undergo a procedure at the Princess Grace, a private hospital in Marylebone, central London.

“The only thing of note was that he started on an antidepressant after our involvement with him, later in May, but I couldn’t comment on the indication for that or any of the aspects around that”, the doctor added.

Dr Christopher McNamara, a consultant haematologist, had been treating Mosley for the lymphoma since October 2019.

In a statement, he told the court there had been a “shift” in April last year from treating the cancer aggressively to treating it to improve Mosley’s “quality of life”.

Dr McNamara said Mosley had pursued some treatments “against his medical advice”.

On May 20, Dr McNamara said he told Mosley he had developed a “fistula”, an opening between areas of the body that are not usually connected.

Dr McNamara said: “He emailed me on 22 May 2021, these were questions about the management of the condition. He had accepted this would not be cured.

“He was extremely upset as his quality of life was poor and left him uncomfortable.

“He  had expressed ideas of committing suicide to myself and other members of the team previously.

“He never expressed a plan of doing this and all he said was that the problem was his wife would not accept this.”

Mosley told Dr McNamara had settled his affairs having heard he would now be on palliative care.

Detective Constable Ben Benlounes told the court there were no signs of forced entry to Mosley’s home in Kensington, central London.

Concluding the death was a suicide, Dr Wilcox said: “I undetstand by the evidence given from Dr McNamara that Max was informed over the weekend that he had weeks to live.

“It was quite clear, learning from Dr McNamra that he had a very limited life expectancy coupled with suffering very debilitating symptoms from his cancer that Mr Mosley reached a settled intent to end his own life.

“He has taken a shot gun from a locked cabinet at his own home for which he had a licence. He took a shotgun and loaded it with cartridges, placed it in his mouth and pulled the trigger.

“He suffered devastating injuries that would have killed him instantly and the misery and pain he suffered from his terminal cancer was over.”

Samaritans (116 123) or email [email protected] operates a 24-hour service available every day of the year for those struggling.