The savage put-down was issued by DUP Westminster chief Sammy Wilson who vented his weary frustrations to the BBC in Westminster’s Central Lobby – and rubbed the Tories appalling local election result in their faces. He explained: “We have always made it quite clear that the agreement we had with the government was to deliver Brexit as had been outlined by the Prime Minister and to deliver Brexit as it would apply to the whole of the UK. The government has not been able to produce a Brexit deal which either delivers on its promises to its own people, in its own manifesto and has not delivered on the promises that it made to us either – that Northern Ireland would not be separated out from the rest of the UK.

“So, therefore, we have no qualms about not supporting the bill or the agreement because the government has actually broken its arrangement with us.

“And not only us, but its own electorate.

“That’s why the government suffered such a defeat in the local government election.

“Because their own electorate feels betrayed by them. 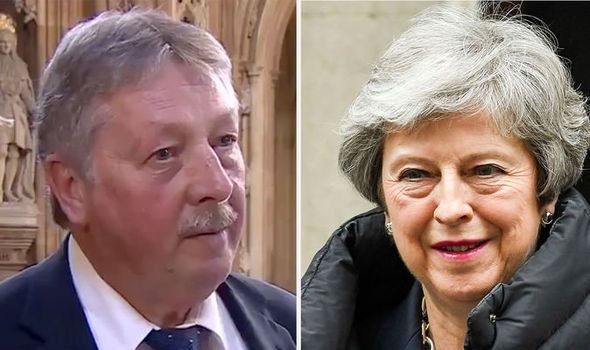 “So you can hardly complain about us not supporting something that their own party voters and councillors have opposed.”

Theresa May’s Brexit deal will be “dead” if MPs reject if a fourth time, ministers have admitted.

Brexit Secretary Steve Barclay acknowledged it would be the end of the road for the deal thrashed out with the European Union if the Withdrawal Agreement Bill (WAB) is defeated when it is brought to the Commons in June.

Defeat would also deal a heavy blow to the Prime Minister’s already fragile authority and, although the WAB vote would not be a formal confidence motion, Number 10 sources acknowledged its significance “won’t be underestimated”.

The legislation writes the Brexit agreement into law and represents a fresh attempt to secure Parliament’s support for a deal which has already been rejected three times by MPs, including the heaviest defeat ever suffered by a Government.

Mr Barclay said the WAB would be published as soon as possible and would have its second reading in the Commons, the first legislative hurdle it would have to clear, in the week beginning June 3.

He told the Lords EU Committee: “I think if the House of Commons does not approve the WAB then the (Michel) Barnier deal is dead in that form.”