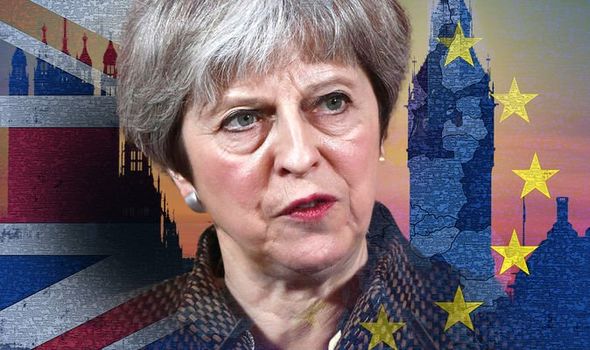 Amid angry clashes at an emergency summit of EU summit in Brussels tonight, the Prime Minister looks set to agree a delay of up to a year in the UK’s departure from the bloc. She is expected to enrage her Brexiteer Tory critics by announcing that she will step up her cross-party talks with Labour in the effort to thrash out a new exit strategy. But her allies say she intends to defy party rebels who want her to stand aside immediately by carrying on in her job until she can ensure the country’s withdrawal from the EU.

European leaders have rowed late into the night at the emergency EU Council meeting called to address the Brexit stalemate at Westminster.

French President Emmanuel Macron repeatedly argued against the flexible arrangement put forward by top Eurocrat that should allow the UK to leave the bloc as soon as an exit agreement can be passed by MPs.

But the delay is certain to intensify Tory demands for the Prime Minister to set a date for her departure from Downing Street.

A Tory source said the Prime Minister was determined to remain in her post until “phase one of the negotiations”, which covers the exit from the EU, is concluded before standing aside to make way for a successor to negotiate the future relationship with the bloc.

“She understands that the Conservative Party feels the sense that a new leadership is required for the second phase of negotiations,” the source said.

“That was the commitment she gave to her party colleagues and it’s one she stands by.”

Mrs May recognised the “urgency” of delivering Brexit and was determined to swiftly build a parliamentary alliance for her Withdrawal Agreement that could ensure the country leaves the EU by June 30.

Former Tory leader Iain Duncan Smith yesterday insisted Mrs May must not be allowed to “drift on” in office after accepting a lengthy Brexit delay.

He warned she could face another second no-confidence vote in the Commons which could force her out.

“It’s almost certain she would lose, it would be humiliating,” he said.

But Justice Secretary David Gauke, an ally of the Prime Minister backed her to stay in office to deliver Brexit.

“I don’t think we should be rushing to change our leader when there is a big task to be done,” he told BBC Radio 5 live.

Mrs May has previously told MPs that “as prime minister” she could not countenance the UK remaining in the EU beyond June 30 and taking part in European Parliamentary elections.

Tory MPs interpreted the remark as an indication she would not stay in office beyond that date.

But the evening’s move towards a delay of up to a year signals that she could remain in office long beyond that deadline.

Downing Street officials between ministers and Labour frontbenchers, which are focused on a watered-down Brexit including a continuing customs union with the bloc, to resume on Friday.

Ahead of the summit, the Prime Minister rounded on MPs who helped delay Brexit by repeatedly blocking her Withdrawal Agreement in the Commons.

“We could actually have been outside the EU by now if we had managed to get the deal through.”

At the summit, Mrs May formally requested a shorter extension that would allow the UK to quit the EU by June 30. She spent an hour addressing leaders and taking questions before being asked to leave the room. 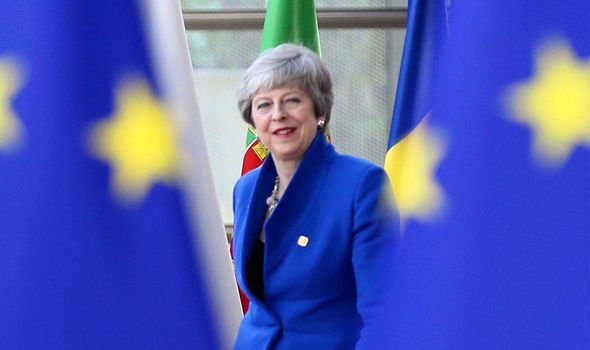 On arriving at the gathering, she said: “I’ve been clear, UK’s request is for an extension until June 30, I have been working to make sure we can leave the EU, indeed we could have left the EU by now but Parliament didn’t pass the withdrawal agreement.

“I’m working to ensure we can leave the EU within the timescale the Government wants to see, I want us to leave the EU in a smooth and orderly way as soon as possible, and that’s what I’m working for.”

She faced the stiffest opposition to her timetable from French President Emmanuel Macron, who pressed for the UK to be forced to agree to a strict series of conditions for remaining in the EU for any delay.

He said: “The British people have chosen to leave the European Union. I regret this choice, it was not what I wanted. But it is not up to us to challenge it or in some way to do everything to prevent it from happening. Now is the time for decisions.

“It is with great impatience that I will listen to Theresa May, but as far as I’m concerned, nothing should be taken for granted, nothing.

“At this stage, in my view, nothing should be taken for granted.”

He added: “The British people decided to leave the EU. I regret this choice but it’s not up to us to contest it, revisit it or in some way to make sure that it isn’t implemented.

“This democratic respect must preside over our decision.

“The time for decisions is now. We have negotiated for two years a Withdrawal Agreement, lots of time has been given. We must now come to decisions.” 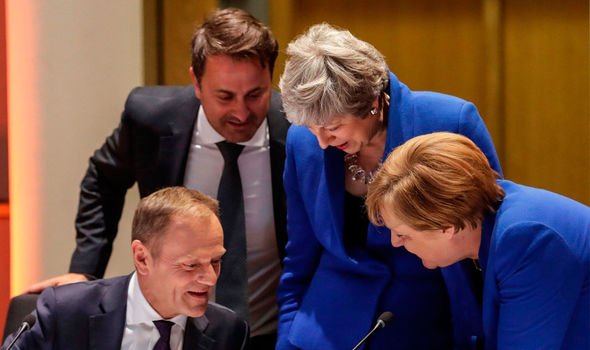 Mrs May received a friendlier reception at the summit from German Chancellor Angela Merkel.

The two leaders were seen laughing at an image on a tablet computer. Aides said it showed snaps of them both in their respective Parliaments wearing similar coloured jackets.

On arriving at the summit, Mrs Merkel told reporters: “In order to make good future co-operation possible, I think we should discuss the Prime Minister’s request openly and constructively.

“We must discuss what is in the interest of good future co-operation and what is in our interests.

“The greatest interest for us is an orderly withdrawal of the UK from the EU and to maintain the unity of the 27.”

“It is only up to the UK to decide,” she said. “Your country’s future is only in your hands, nobody else. It’s only up to you.

“You decide your fate, not us. We would only like to help you make this decision.”

Meanwhile, Irish Taoiseach Leo Varadkar indicated that he would be prepared to contemplate a role for the UK in helping decide EU trade policies if it remains in a customs union after Brexit.

The unanimous agreement of all 27 remaining EU states is needed to avoid a no-deal Brexit at 11pm on Friday, April 12.

European Commission spokesman Margaritis Schinas said Brussels was “fully prepared” to cope in the event of a no-deal Brexit.

“This is not our desired outcome but we are not afraid of it. We are prepared,” he said.

The Prime Minister remains under intense pressure from Conservative MPs who oppose any further delay.

At Prime Minister’s Questions, Tory backbencher Craig Tracey said she should abandon her “diluted deal” and take Britain out on World Trade Organisation terms, while Henry Smith warned that an extension would cost the UK £1 billion a month.

Mrs May however told MPs that Britain would already be outside the EU if they had been prepared to vote for her Withdrawal Agreement.

“We could actually have been outside the EU by now if we had managed to get the deal through.”

The depth of the anger within the Tory ranks was underlined by a Commons vote on Tuesday, when 97 Tory MPs voted against a motion backing Mrs May’s call for an extension which only passed with the support of opposition MPs.