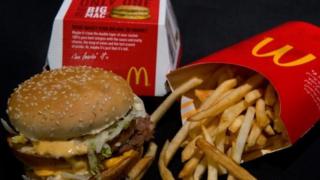 An Irish fast food company has won a case against McDonald’s to prevent it trademarking the terms “Big Mac” and “Mc” in some instances in Europe.

The European Union Intellectual Property Office ruled McDonald’s had not proven genuine use of “Big Mac” as a burger or a restaurant name.

Galway-based Supermac’s said it opened the door to register its brand in Europe as a trademark.

This is not the first time McDonald’s has gone to the courts over prefixes.

In 2013, a European court upheld a ruling that a Singaporean company – MacCoffee – had unfairly benefited from the branding of the US burger giant due to its use of the ‘Mc’ prefix.

However, Tuesday’s judgement rebukes that.

Supermac’s had previously attempted to expand operations into UK and Europe.

However this move was brought to a halt after McDonald’s won a battle over the similarity between the name Supermac’s and Big Mac.

“But just because McDonald’s has deep pockets and we are relatively small in context, doesn’t mean we weren’t going to fight our corner,” he added.

“We’ve been saying for years that they (McDonald’s) have been using trademark bullying.

“This is the end of the McBully.”

A Swiss village may have to evacuate for over a decade while authorities clear a huge World War Two arms dump. The defence ministry concluded…

A group of councils in London affected by the expansion, environmental charities including Greenpeace, Friends Of The Earth and Plan B, and Mayor of London…

TALLINN (AFP) – Estonia reported its first coronavirus case on Thursday (Feb 27), a day after the man returned to the Baltic nation of just…

MILAN (Reuters) – The governor of the region of Lombardy, at the epicenter of Italy’s coronavirus outbreak, has placed himself in quarantine after one of…

A stray Staffordshire bull terrier cross has found a new home thanks to her incredible smile. Sybil was brought to an animal rescue shelter earlier…