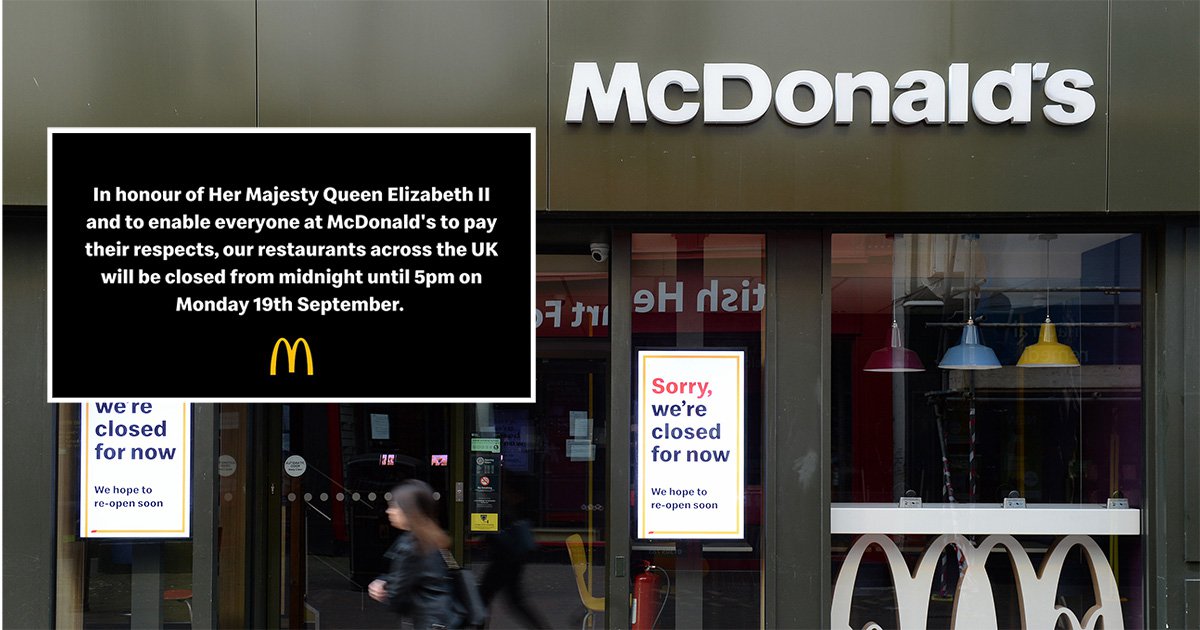 McDonald’s will close all their restaurants for most of Monday to ‘pay their respect’ to Queen Elizabeth II.

It was announced on Saturday that the late monarch’s funeral will take place at 11am on September 19.

This afternoon the fast-food chain announced changes in their opening and closing times for the historic day.

The move will give the around 120,000 staff the opportunity to come to terms with the tragedy with the rest of the nation.

A statement on social media said: ‘In honour of Her Majesty Queen Elizabeth II and to enable everyone at McDonald’s to pay their respects, our restaurants across the UK will be closed from midnight until 5pm on Monday, September 19.’

This means that none of the 1,270 branches in the UK will be open before 5pm.

All of our UK restaurants will be closed on Monday until 5pm, to allow everyone at McDonaldâs to pay their respects to Her Majesty Queen Elizabeth II.

Operating hours and services may vary after 5pm, so please check our app before travelling. pic.twitter.com/OOws3q8hnb

Operating hours and services may also vary afterwards depending on the area.

Responding to a customer asking about deliveries, McDonald’s said that ‘rest assured they will be aiming to make deliveries as soon as possible’.

The decision to close for most of Monday will not affect restaurant employees, who will be paid for their scheduled hours.

Some businesses have already decided to close, including supermarkets and high street favourites, with many more expected to follow suit.

John Lewis, Harrods and Primark are just some of the retailers that will be shut on the day of the funeral.

Tens of thousands of mourners are expected to flock to central London to wave a last goodbye to the Queen on Monday.

The 11am service at Westminster Abbey will also be watched by millions on TV.