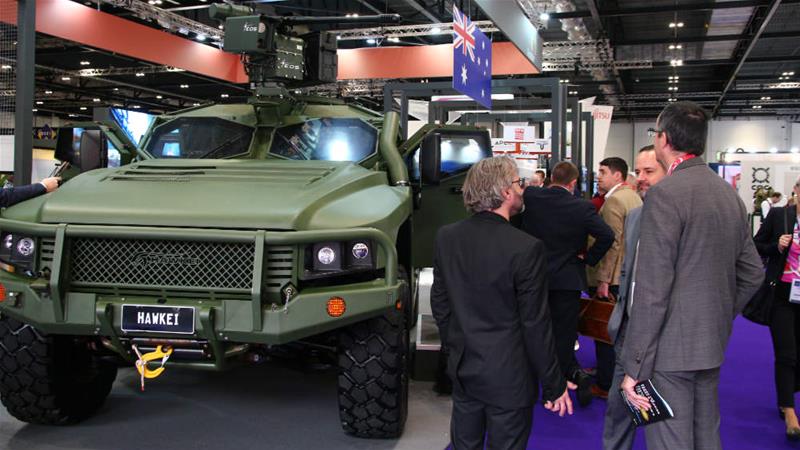 London, United Kingdom – The opening day of the Defence and Security Equipment International (DSEI) arms fair in London saw the UK government award a major contract to an Israeli firm linked to atrocities committed against Palestinians in Gaza.

One of the largest Israeli firms displaying at the event, Elbit supplies its range of Hermes drones to the Israeli military, which used them during its 2009 invasion of Gaza and in the killing of four children on a beach in Gaza in 2014.

All ten of the world’s largest arms manufacturers displayed at the biennial event, the most important showcase of British arms exports – a sector worth $17.3 billion last year. Airbus, Raytheon, BAE Systems, Lockheed Martin and several others have been accused by Amnesty International of neglecting their commitments to human rights by supplying weapons to the Saudi-led coalition waging war in Yemen.

“These companies are supplying weapons to very high risk markets in the Middle East and their weapons are being used in Yemen, where violations of International Humanitarian Law are widespread,” said Amnesty International’s Patrick Wilken.

“The fact that the UK government is providing a platform for further sales, and inviting delegates such as Saudi Arabia and UAE, who it has sold billions of dollars worth of equipment to, raises serious questions about the UK’s overall arms control policy and its commitment to human rights.”

A spokesperson for Airbus, which manufactures fighter jets and support aircraft, told Al Jazeera the company supported the UN Global Compact for socially responsible business policies – and “will always conduct its business ethically, based on Airbus values, and in compliance with all applicable laws and regulations”.

But concerns surrounding human rights did not prevent this year’s DSEI becoming the first in the event’s history at London’s enormous Excel centre to see all exhibition space snapped up, forcing some firms to construct two-storey stalls equipped with meeting rooms to discuss deals with prospective buyers.

Deals between military representatives and manufacturers are not typically struck during the DSEI week, as procurement processes can take upwards of six months, but the trade show offers a chance to build contacts and catch the attention of more than 50 deep-pocketed national military delegations.

Showmanship is still a critical element of attracting attention in the industry, and attendees were treated to an array of interactive exhibitions to experience the latest in military hardware first-hand.

A long queue formed for a chance to climb into the cockpit of a concept model of a Tempest jet fighter, a next-generation AI-driven replacement for the Eurofighter Typhoon to be manufactured by BAE Systems for Britain’s Royal Air Force, for which the UK government has already pledged $2.5 billion. 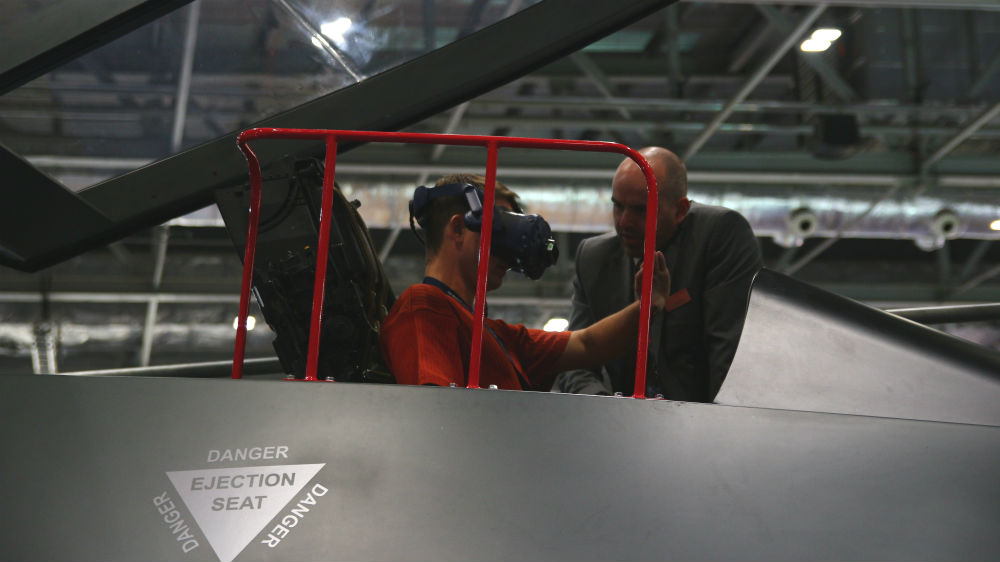 One interactive game by Japanese computer firm Fujitsu put the user in charge of its crisis management dashboard, challenged to evacuate British civilians from the fictional country of Nambodia, apparently a disguised Cameroon, as it slides into civil war.

Tony Laubria, whose training munitions firm constructed a miniature firing range for visitors to test out their product and pose for photos, said the experience had been predictably popular among DSEI visitors.

“Most stalls here are just talking stands but here you can get your hands on it,” he told Al Jazeera. “You have to pick it up yourself and handle it or you don’t quite understand it.”

Though fully-autonomous weaponry is still beset by ethical concerns, dozens of exhibitors showcased semi-automomous vehicles and defence systems which could operate with minimal human involvement, such as mobile artillery pieces and vehicle mounted machine guns.

Several exhibitors told Al Jazeera that demand has been growing around the world, especially in the Middle East and Asia, for border monitoring equipment such as AI communications software and long-range thermal cameras able to detect a person more than 10km away.

“A lot of people are looking to protect their borders, so they’re looking for light, compact designs with particularly long range capabilities,” said a representative for Italian aerospace and defence giant Leonardo.

As the day’s business wound to a close, the mood became more convivial as attendees began socialising around the weaponry stalls providing free alcohol. 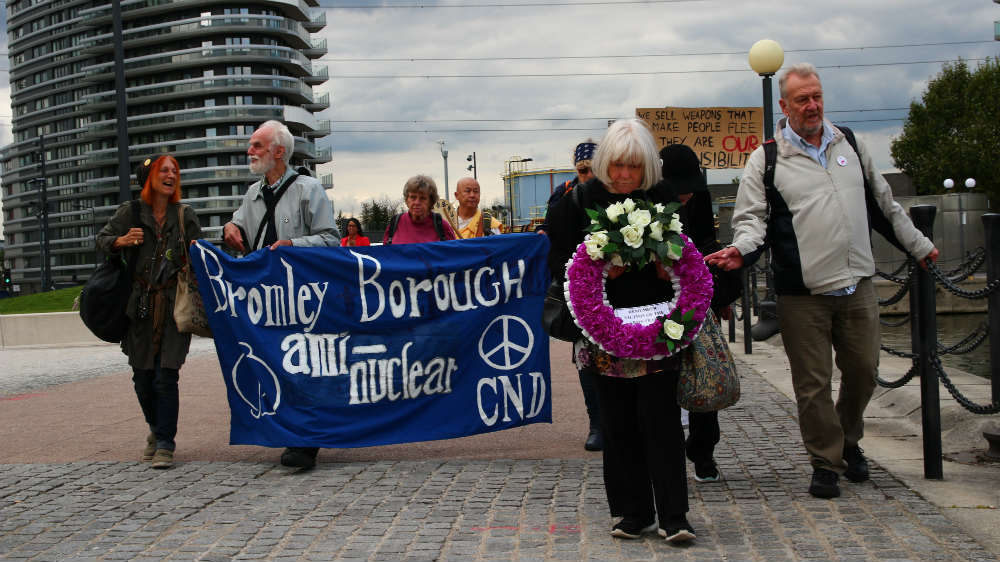 Standing back from the display of Sweden’s Saab AB, where dozens of people chatted around model torpedos with sparkling wine or beer in hand, John Herbert reflected on the rapid changes he’s seen in years of attending arms trade fairs since leaving the British military.

“The defence industry is evolving monthly… to keep up with policy and with militaries,” he said.

When asked about protesters’ objections to DSEI, Herbert told Al Jazeera that the industry was necessary to create a safe environment to protect people.

Several companies and national pavilions, including BAE Systems and Raytheon, either refused to comment to Al Jazeera or did not provide a spokesperson to speak with. A representative of the Saudi Arabian pavilion said he was “not authorised to give a statement” to Al Jazeera.

Outside the centre, a group of around 15 activists walked solemnly – while watched closely by police officers – across the wharf from the HMS Argyle frigate and several other docked warships, to lay a wreath in commemoration of the victims of weapons sold at previous fairs.

Bill Parry, a life-long resident of nearby Silvertown, where he runs a cafe, has demonstrated against the DSEI since it arrive in his neighbourhood 18 years ago. He helped to establish the community group East London Against the Arms Fair.

“This area was the most bombed part of London during the war,” he told Al Jazeera.

“I grew up with the debris and the bomb sites from the Second World War,” he added, noting that Saturday was the 79th anniversary of the first Nazi bombing run on London, the beginning of a sustained campaign of civilian targeting that would eventually kill around 40,000 people.

Recent protests have been smaller than in the past, he admitted, but at least the public are now paying attention.

“Our main purpose was to raise public awareness of what an arms fair is, and on that level we succeeded,” he said. “We didn’t stop the arms fair but we certainly made local people and Londoners more aware of what’s going on.”