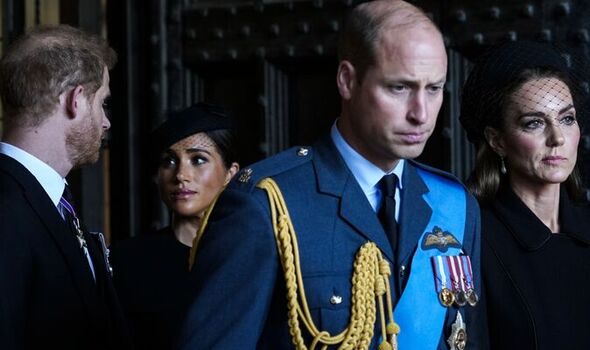 Meghan Markle and Prince Harry will sit across the aisle from the Prince and Princess of Wales at the Queen’s state funeral, it has been revealed. The Duke of Sussex will sit directly behind King Charles while Meghan, the Duchess of Sussex, will be sat behind Queen Consort, Camilla. Duchess Meghan will be sitting next to the Queen’s granddaughter Princess Beatrice.

Across the aisle will be the Prince of Wales, the Princess of Wales, and their two children Prince George and Princess Charlotte, and then Peter Phillips and Zara and Mike Tindall.

It comes amid reports the Duke and Duchess of Sussex were uninvited to Sunday evening’s “state reception of the century” at Buckingham Palace.

Palace aides said ony working members of the Royal Family were able to attend the event.

Tensions between the Firm and Harry and Meghan have been tense since they stepped back from senior royal duties in 2020.

But the Prince and Princess of Wales put on a united front with the Duke and Duchess of Sussex as they joined forces on a walkabout at Windsor Castle on Saturday – just a few days after the death of the Queen.

As the couple’s first engagement under their new titles, William and Kate were joined by Harry and Meghan for the first time since Commonwealth Day on March 9 2020.

And Royal brothers Prince William and Prince Harry joined together to stand by the side of their beloved grandmother’s coffin during a poignant vigil at Westminster Hall on Saturday.