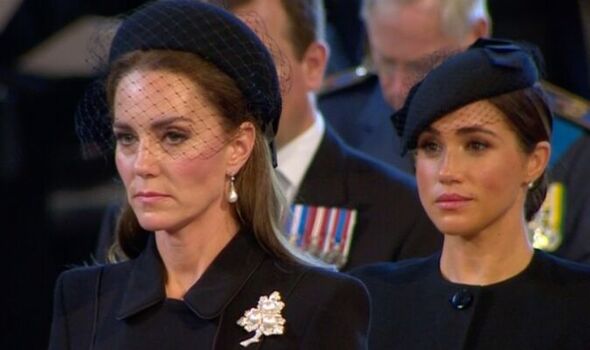 Meghan Markle and Kate, the Princess of Wales, were seen next to one other at Westminster Hall.

A short service is being held at the hall as the Queen’s coffin arrives, accompanied by the Royal Family.

While relations have reportedly been tense between brothers William and Harry, the death of their grandmother appears to have brought the two closer together.

Kate appears emotional during the service, while Meghan stands stoicly beside her.

The pair have not interacted for two years following Meghan and Harry’s move to the US.

The two couples were once known as the “fab four”, before the dramatic exit of the Duke and Duchess of Sussex from the Royal Family.

When Harry and Meghan returned to the UK on September 3, their relationship appeared to still be in dire straits.

Royal sources claimed that “trust was a big issue” between the couples.

There were no plans for the Sussexes to visit Kate and William, despite staying in Frogmore Cottage – just a fifteen-minute walk from their house.

But with the death of the Queen last week, it appears William and Harry have been reunited in their grief.

William invited Harry to join him in inspecting floral tributes to Her Majesty at Windsor Castle.