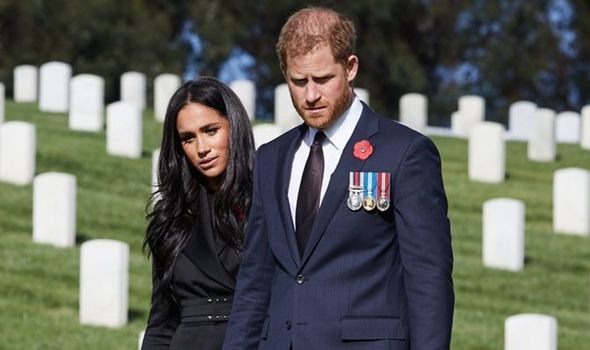 But the Good Morning Britain presenter hit out at the Sussexes after pictures were released.

Morgan tweeted: “My god, they’ve even turned Remembrance Sunday into another self-publicity stunt. Have they no shame?”

Royal commentator Dan Wootton also took a swipe at Meghan and Harry over the visit.

He said in a Twitter post: “How lucky that a photographer happened to be here to capture this deeply personal moment.”

Meghan and Harry laid flowers from the garden of their Californian mansion at the graves of two Commonwealth soldiers.

They also placed a wreath at an obelisk in the cemetery, with a message from Harry which read: “To all of those who have served, and are serving. Thank you.”

A spokesman for the Sussexes said: “It was important to the duke and duchess to be able to personally recognise Remembrance in their own way, to pay tribute to those who have served and to those who gave their lives,” a statement said.

“The couple laid flowers that the duchess picked from their garden at the gravesites of two Commonwealth soldiers, one who had served in the Royal Australian Air Force and one from the Royal Canadian Artillery.”