Meghan Markle and Prince Harry have partnered up with Spotify to introduce their new podcast Archewell Audio. However, commentator Darren Grimes has warned this could be a dangerous move by the Duke and Duchess. During his Reasoned show on Youtube, he said that this could put the Royal Family in a compromised position if the royal couple introduces anyone who holds strong political views.

Mr Grimes also reflected on what Meghan and Harry could talk about on this podcast and whether they would choose to delve into politics themselves.

He also questioned how the Royal Family would react to this possibility.

He said: “We have already seen that they have got their own honours and gongs to hand out now in competition with Her Majesty the Queen’s MBEs OBEs, Knighthoods you name it.

“Will Meghan and Harry be offering other platforms as far as politics is concerned too?

DON’T MISS: Meghan Markle and Prince Harry praised for ‘going their own way’ 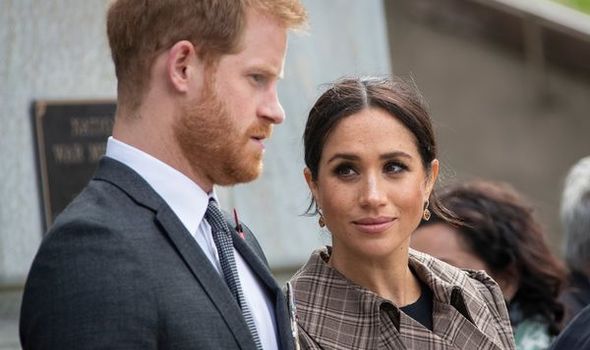 “What is their status as royals because this starts to become pretty dangerous territory for the Royal Family.

“If these celebrities are able to swan around Hollywood, be front and centre of a camera on Netflix or the audio of a Spotify playlist elevating those with political opinions, it might actually go against the grain and break royal protocol.

“Surely it calls into question, the farse of them wanting a private life, that has been exposed as the farcical sham it always was.

“But it also exposes the fact that the Royal Family have not removed the royal titles from this couple.

“To me, it strikes me as quite a dangerous move by the Royal Family.

“This is because it exposes the magic of monarchy.”

Mr Grimes also read out the comments from Spotify on the podcast.

Spotify tweeted the announcement of the podcast on Tuesday and said: “Put the kettle on, a new holiday special from Prince Harry and Meghan, the Duke and Duchess of Sussex, is coming soon only on Spotify.”

Mr Grimes said: “Spotify has commented on this deal, the launch of this podcast channel Archewell Audio.

“They said: ‘We look forward to listeners hearing directly from them and the other creators that they will be elevating via our global platform.’

“What people will Meghan and Harry be elevating via their global platform?”