Meghan Markle and Sophie Wessex are expected to follow the Queen’s funeral procession by car as plans for the historic occasion have been revealed today. King Charles will lead members of the Royal Family in walking behind the late monarch’s coffin when it is moved from Westminster Hall to Westminster Abbey on Monday for the state funeral.

The Duchess of Sussex, who is living in the US with Prince Harry after quitting royal duties two years ago, and the Countess of Wessex, said to have been like a second daughter to the late Queen, are expected to be among royals travelling by car.

Meghan and Sophie previously shared a vehicle when Her Majesty left Buckingham Palace for the last time on Wednesday for Westminster Hall where she is lying in state ahead of the funeral. Thousands of ordinary people from across Britain are flocking to pay their respects.

Charles – who spent a private day at his Birkhall residence in Gloucestershire today – will walk in the procession to Westminster Abbey next Monday with his siblings Princess Anne, Prince Andrew and Prince Edward.

Behind will be brothers Prince William and Prince Harry, who have a fractured relationship but have united in their grief for their grandmother, along with Peter Phillips, who is another one of the Queen’s grandsons.

They will be followed by the Princess Royal’s husband Vice Admiral Sir Tim Laurence, the late Queen’s cousin the Duke of Gloucester, and her nephew the Earl of Snowdon. 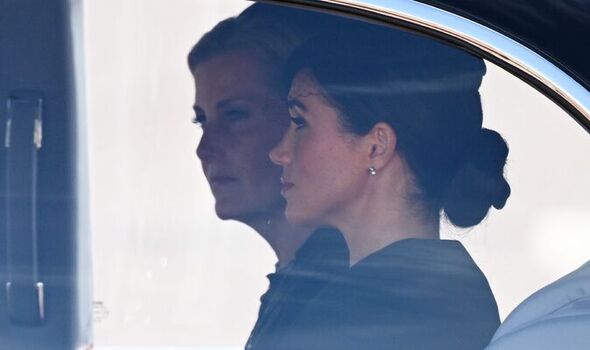 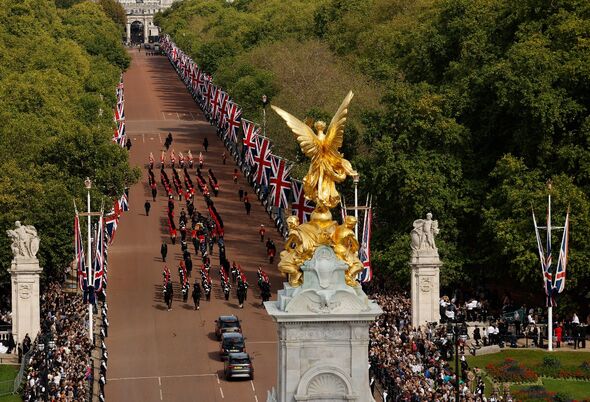 Other royals, including Meghan and Sophie, will complete the solemn journey by car.

The coffin will be carried during the procession on a 123-year-old gun carriage, pulled by 98 Royal Navy sailors using ropes in a tradition dating back to the funeral of Queen Victoria.

The procession will be led by a massed Pipes & Drums of Scottish and Irish Regiments, the Brigade of Gurkhas, and the Royal Air Force – numbering 200 musicians.

The congregation will begin to file into Westminster Abbey from 8am before the service, conducted by the Dean of Westminster, starts at 11am.

Two thousand people including world leaders and foreign royals will take their seats inside the church in central London to say goodbye to the beloved late Queen, who was consulted on plans for the state funeral. 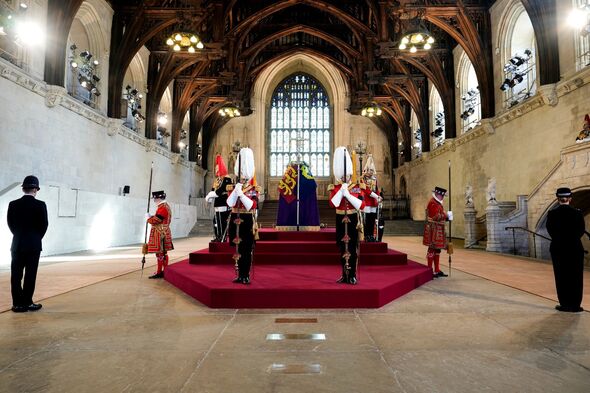 US President Joe Biden and French leader Emmanuel Macron will be among the world leaders attending the ceremonial event.

The coffin will be moved to Westminster Abbey for the service at 10.44am on Monday.

Moving elements of the funeral will include the sounding of the Last Post at 11.55am as the service nears its end.

There will then be a two-minute national silence which will be observed by the congregation and millions across the UK.

The Reveille and then the National Anthem will then take place, and finally, a Lament played by the Queen’s Piper which will bring the service to a close at noon. 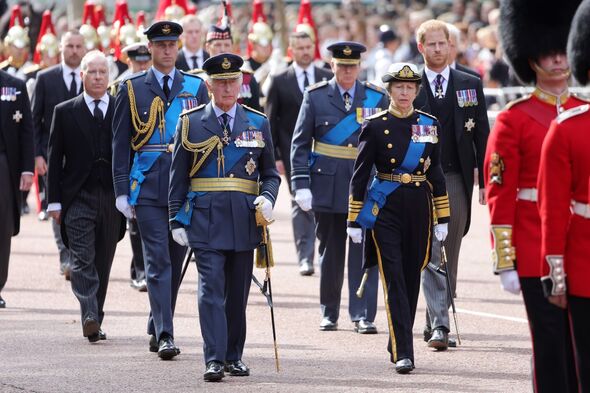 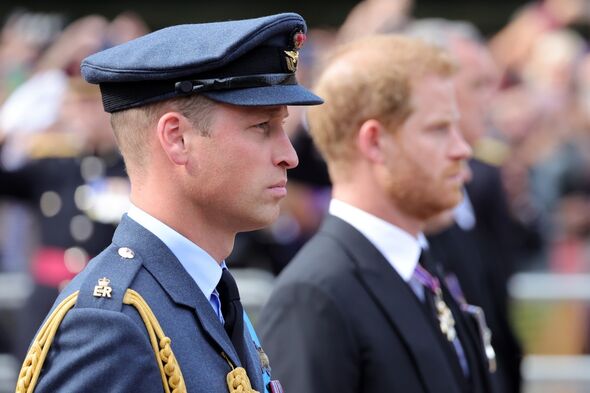 The Earl Marshal, the Duke of Norfolk, who is in charge of the plans, said the state funeral will “unite people across the globe and resonate with people of all faiths” and pay a “fitting tribute to an extraordinary reign”.

Some 800 people, including members of the Queen’s Household and Windsor estate staff, will attend the committal service afterwards at 4pm in St George’s Chapel.

Following the service at Westminster Abbey, the King and other royals will walk behind the coffin once again as it leaves Westminster Abbey for Wellington Arch, before it is driven to Windsor on the state hearse.

The route from central London has not been confirmed but the hearse will travel down the Long Walk to Windsor Castle.

Charles and other members of the monarchy will follow behind on foot from the quadrangle as the Queen’s coffin approaches St Geoge’s Chapel. 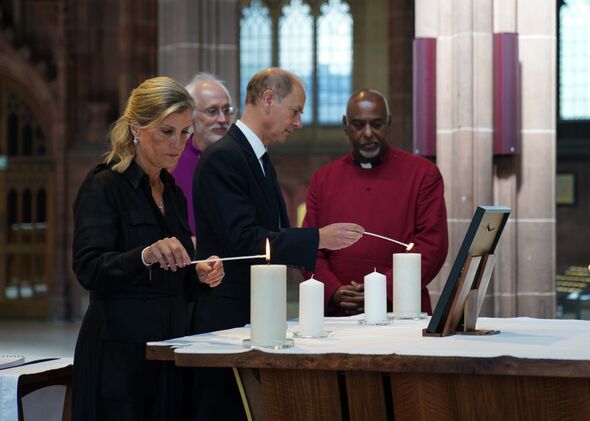 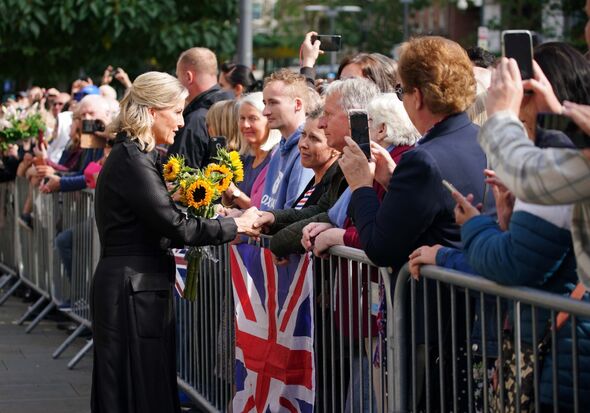 The late Queen will be reunited with Prince Philip, who died last year, when she is laid to rest alongside her beloved husband in the King George VI Memorial Chapel in a private service at 7.30pm.

The Earl Marshal said of the state funeral: “The events of recent days are a reminder of the strength of our Constitution, a system of government, which in so many ways is the envy of the world.

“The Queen held a unique and timeless position in all our lives. This has been felt more keenly over the past few days as the world comes to terms with her demise.

“Her Majesty’s passing has left many people across many continents with a profound sense of loss.

“The respect, admiration and affection in which the Queen was held make our task both humbling and daunting. An honour and a great responsibility. 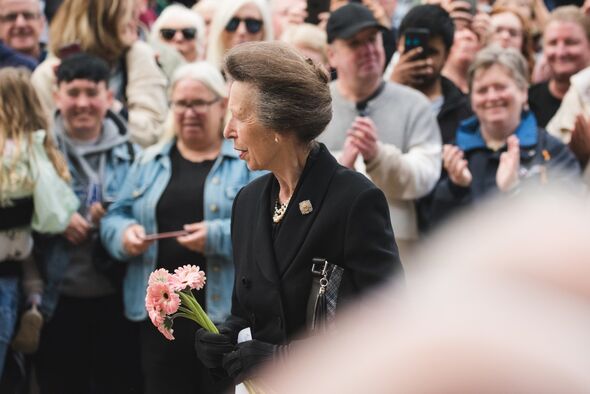 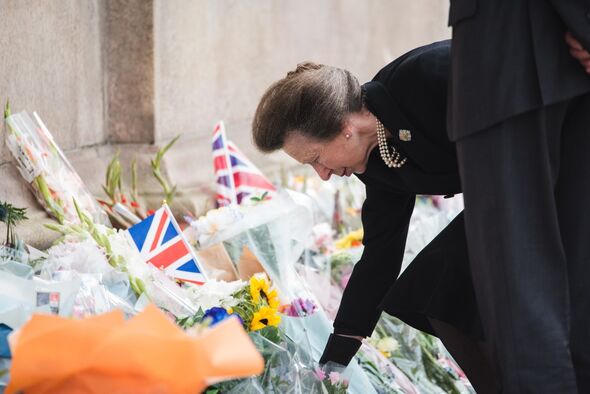 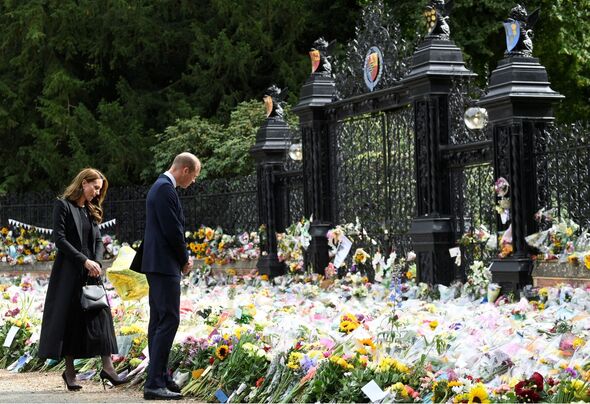 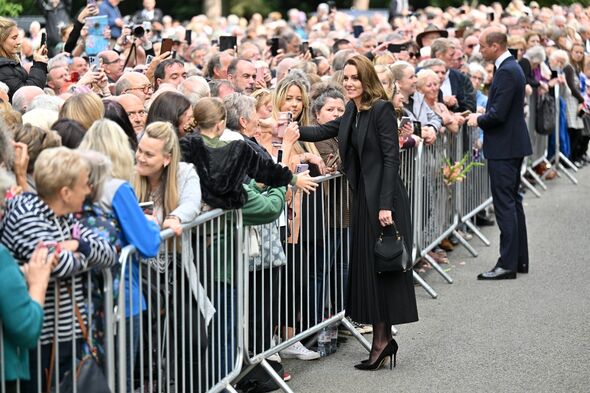 “It is our aim and belief that the state funeral and events of the next few days will unite people across the globe and resonate with people of all faiths, whilst fulfilling Her Majesty and her family’s wishes to pay a fitting tribute to an extraordinary reign.”

It comes as Sophie stepped out with Edward at Manchester Cathedral today to light candles in memory of the Queen.

The Prince and Princess of Wales greeted well-wishers and viewed floral tributes outside Sandringham House in Norfolk during an hour-long walkabout this afternoon.

Anne was in Glasgow to meet representatives of organisations which the Queen was a patron of during a visit to the City Chambers on Thursday afternoon.

The stoic royal, who accompanied her mother on her last journey back from Scotland after she died peacefully at Balmoral last Thursday, took her time viewing flowers and greeting the crowd.

Meanwhile, in Westminster Hall, mourners who have queued for hours are filing past the late Queen as she lies in state. The lying in state ends at 6.30am on Monday.