Elton John broke the silence over reports of Meghan and Prince Harry getting on a private jet four times in 11 days. In a series of tweets, the Rocketman star revealed he has been the one lending the Duke and Duchess of Sussex his private jet to make sure they enjoyed a short break in complete privacy.

Elton also said he helped the couple because he feels a “profound sense of obligation” to protect Prince Harry, the youngest son of his dear friend, late Princess Diana.

The singer wrote on Twitter:  “I am deeply distressed by today’s distorted and malicious account in the press surrounding the Duke and Duchess of Sussex’s private stay at my home in Nice last week.

“Prince Harry’s Mother, Diana Princess Of Wales was one of my dearest friends. 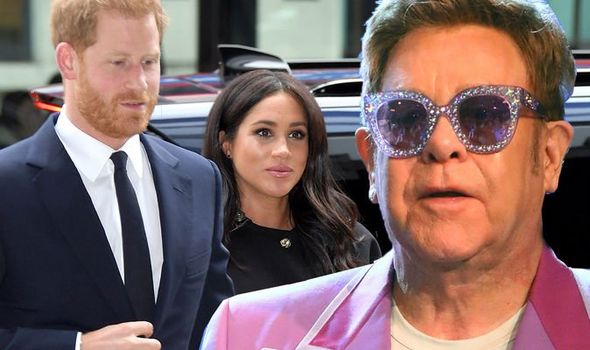 “I feel a profound sense of obligation to protect Harry and his family from the unnecessary press intrusion that contributed to Diana’s untimely death.

“After a hectic year continuing their hard work and dedication to charity, David and I wanted the young family to have a private holiday inside the safety and tranquility of our home.

“To maintain a high level of much-needed protection, we provided them with a private jet flight.

“To support Prince Harry’s commitment to the environment, we ensured their flight was carbon neutral, by making the appropriate contribution to Carbon Footprint™.

“I highly respect and applaud both Harry and Meghan’s commitment to charity and I’m calling on the press to cease these relentless and untrue assassinations on their character that are spuriously crafted on an almost daily basis.

Meghan and Prince Harry have been harshly criticised by commentators and members of the public after it came to light that, within 11 days, they travelled four times using a private jet.

They are believed to have stayed at a lavish resort where a week-long stay can cost as much as £20,000.

The Vista Alegre, a beautiful resort facing the sea, often hosts A-listers and music celebrities, including Sir Paul McCartney and DJ David Guetta, according to The Sun.

On Wednesday, the family-of-three was spotted leaving a private jet landed in Nice, France, before entering a car that took them to their new holiday destination.