Prince Harry and Meghan Markle are expecting their first baby at the end of the month, following months of speculation over the gender of their first child, as royal fans around the world wait with eager anticipation. But according to Harper’s Bazaar magazine, Prince Harry’s mother-in-law, Dora Ragland, is staying with the couple at their Frogmore House residence in the grounds of Windsor Castle. The magazine claims Ms Ragland has been staying with Harry, 36 and Meghan, 37, since April 16, to help the royal couple as they prepare for baby’s arrival.

Meghan has a close relationship with her mother, who has been spotted at royal engagements such as the Duke and Duchess’ fairy-tale royal wedding last May.

The source also claimed Meghan’s mother is helping the couple settle into their new home – which they officially moved into earlier this month – in order to help the young parents-to-be remain “focused on family life”.

The couple said: “Of course they’re making plans for the future, and they’re very excited about the options, but right now they have just moved into a beautiful new home and are focused on family life.” 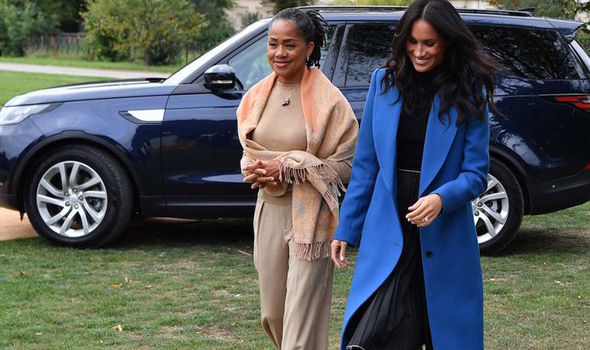 The source added that the couple aren’t “thinking about anything else right now”.

And following rumours the Duke and Duchess could move to Africa ‘for up to three years’, the source dismissed the claims, saying there stay on the continent would be shorter.

The source, who is thought to be a close friend of the couple, said: “Britain is their home and where they want to raise their family. If they are to work abroad it would be a short stint.

“Both the Duke and Duchess are keen to balance projects in Britain and overseas, particularly countries in Africa. We’re talking a few months away or a series of trips.”

Backing up claims of Ms Ragland relocating to the UK, another source told the Sun on Sunday: “Like all mums, Doria wants to be there for her daughter at this seismic event in her life.

“Meghan also wanted to show off her new house to her mum and the two have been enjoying spending time together.” 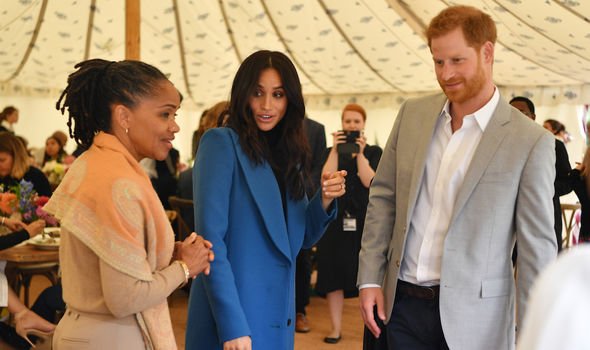 Meghan and Harry spent around £3million renovating Frogmore cottage after splitting from Prince William and the Duchess of Cambridge at Kensington Palace.

The Duke and Duchess of Sussex have decided to keep details of their baby’s delivery private until after they have celebrated as a family, according to a statement issued by Buckingham Palace.

A source has claimed a home birth is Meghan’s preferred option – although the same source said a hospital delivery had not been entirely ruled out.

Should Meghan opt for a hospital birth, Frimley Park Hospital is the closest to the Duke and Duchess’s home, Frogmore Cottage in Windsor.