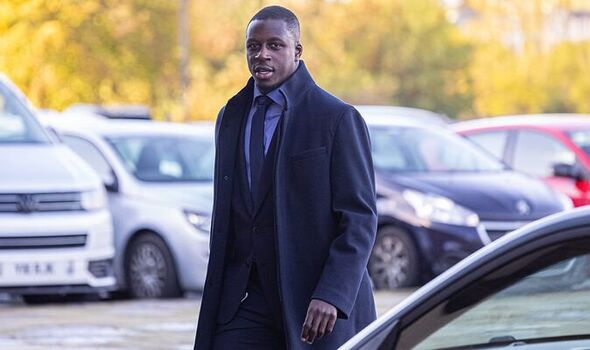 A teenager who claims she was raped by footballer Benjamin Mendy allegedly asked for the phone number of his Manchester City teammate Jack Grealish to contact another woman at the party hours after the alleged attack took place, a court has heard. The woman, who was 17 at the time, claims she was raped twice by Mendy at a party at his house last summer.

The trial of Manchester City footballer Benjamin Mendy resumed today after a two-week recess. Mendy, 28, and co-accused Louis Saha Matturie, 41, deny all allegations against them.

Mendy denies seven counts of rape, one count of attempted rape and one count of sexual assault against six women.

Grealish was at the same party that the alleged incident occurred.

Chester Crown Court heard today that the teenager claimed she had asked Matturie for Grealish’s phone number so she could contact another woman she had seen at the party.

The trial was adjourned at the end of September after a juror tested positive for Covid-19, and then delayed again after a second juror also tested positive.

Messages the 17-year-old sent to friends after leaving the party were read to the jury.

Lisa Wilding KC, defending Matturie, read one message from the teenager, which said: “Jack Grealish is so sexy in person, he had been winking at you all night and saying how beautiful you were, but you did not sleep with him because you are not easy but you were invited out with them all next week.”

Ms Wilding continued: “These messages reveal how you really were that morning, happy, you had had a great night, that’s the truth of it?” The witness replied: “No, that’s not true.”

Ms Wilding claimed that the teenager had started to worry about what her boyfriend might say if she found out she had sex with two men that night, before allegedly getting “carried away”.

Earlier, Chester Crown Court heard that the teenager and another young woman went to Mendy’s home last summer for an after party, after a visit to a nightclub.

Both women claim they had their phones taken off them when they arrived at his house in Prestbury, Cheshire.

The teenager told police that Matturie and the woman, 23, went to get more alcohol.

Matturie is then alleged to have raped the woman in the car they had used to go to the shop, before the two returned to Mendy’s home. The 17-year-old said the woman then told her of the incident.

The court heard the teenager claims that Mendy later led her into an office, where he allegedly raped her twice.

The teenager also claims that she was then raped by Matturie in a cinema room in the house, after she had been allegedly raped by Mendy.

She claimed before the court that she was raped again by Matturie at a flat in Manchester on the same day.