However, Dan Stroud, a meteorologist with the UK’s national weather service, warned that there would be a chilly start early on Sunday. Mr Stroud also said that Sunday would be a cloudy day with the risk of some light rain.

He said: “It’s a chilly start right the way across the country on Sunday morning.

“Although we are looking at increasing amounts of cloud across the north and that cloud will gradually spill southwards during the course of Sunday morning and into the afternoon.

“So a much cloudier picture by the end of the afternoon.

“Temperatures during the course of Sunday, slightly higher than what we actually saw on Saturday. 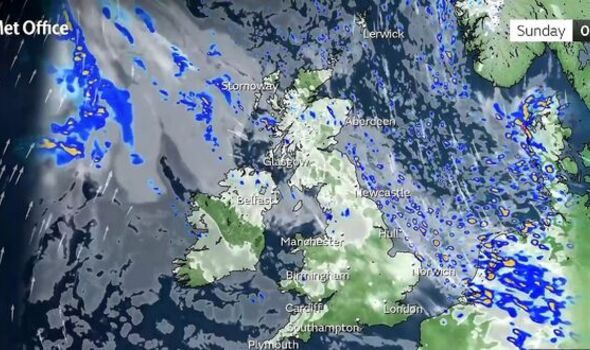 “With highs of 19 across the south and 16 across parts of Scotland.

“And into Sunday evening, so remaining largely cloudy and some of that cloud thick enough to give a few outbreaks of light rain and drizzle here and there.”

In a more general forecast for Sunday, the Met Office said that eastern England could face some showers.

They added that the showers could reach parts of Northern Ireland, southern Scotland and the Midlands.

However, in other areas of the country, it looks set to be largely dry.

They said: “Showers easing in the north but continuing for coastal eastern England as well as parts of Northern Ireland, southern Scotland and as far south as the Midlands.

Mr Stroud had good news for royal fans concerned about the forecast for Her Majesty’s state funeral in London on Monday. 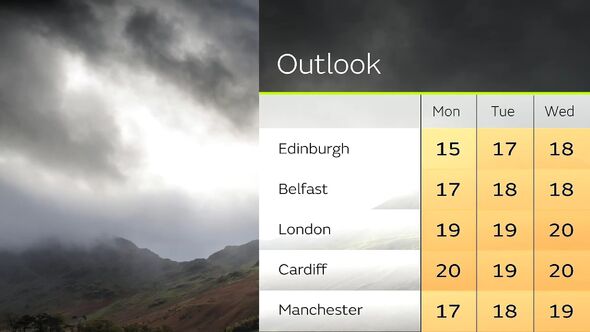 The meteorologist said that the weather is likely to be “settled” despite some cloudy conditions.

He added that temperatures would be “average” with highs of 19 or 20 celsius in London and the South East.

Therefore conditions should be ideal as the nation says goodbye to its longest-serving monarch.

He said: “And looking even further into Monday.

“So remaining largely settled, although generally cloudy for many of us and temperatures near average across much of the country with highs of 19 or 20 across parts of London and the southeast.”