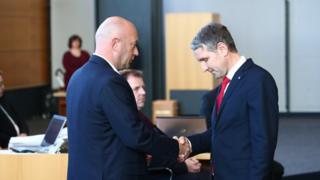 German Chancellor Angela Merkel says the election of a liberal leader in eastern Germany with help from the far-right AfD party is “unforgivable” and must be reversed.

Thomas Kemmerich of the liberal FDP became premier of Thuringia after the AfD, in a surprise move, voted for him.

The situation is being described as a political earthquake, as the mainstream parties have always refused to do deals with Alternative for Germany (AfD).

The AfD has broad support in Thuringia.

But the state election in October was won by the far-left Die Linke, whose leader Bodo Ramelow was ousted in Wednesday’s vote.

Speaking on a visit to South Africa, Chancellor Merkel said the Thuringia vote had to be reversed – implying that the state election would have to be re-run.

The Free Democrats’ (FDP) leader, Christian Lindner, was heading to the state capital Erfurt on Thursday for urgent talks with Mr Kemmerich, who is under intense pressure to quit. He has refused to step down so far.

Some have compared the AfD’s surprise move to the Nazis’ rise to power and there were protests in several German cities after the election.

In 1930 a Nazi entered the Thuringia government – the party’s first big breakthrough in the Weimar Republic, culminating in Adolf Hitler’s appointment as chancellor in 1933.

In Wednesday’s vote Mr Kemmerich beat Mr Ramelow by 45 votes to 44. Besides the support of the AfD, Mr Kemmerich also got votes from local MPs in his own FDP and Mrs Merkel’s Christian Democrat Party (CDU).

The Thuringia AfD is led by Björn Höcke, one of the AfD’s most controversial figures.

He sparked an outcry when he condemned the decision to place the Holocaust memorial in the heart of Berlin, describing it as a “memorial of shame”.

Critics of Mr Kemmerich’s election were appalled that the two centre-right parties had apparently made a pact with a party that holds extreme views on immigration, freedom of speech and the press.

His party had barely scraped into the local parliament in Erfurt with just 5% of the vote last October.