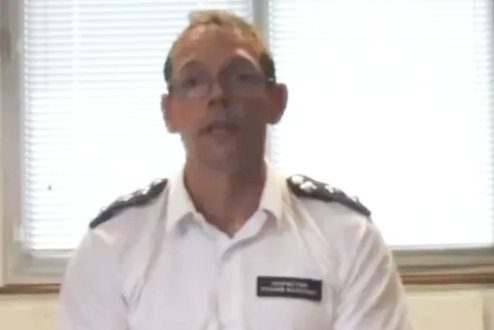 A senior Metropolitan Police officer was found dead before he could face charges for possessing child sex abuse images, it has been reported.

Officers discovered the body of a man in his 40s in his home last Thursday afternoon.

It is believed the body belongs to Richard Watkinson, 49, The Sun has revealed.

Sources told the outlet he was found dead on the same day he was supposed to appear at a police station to be charged with several crimes relating to child abuse content.

He allegedly had a trap door which led to a secret room in his home where he kept thousands of horrific images and a stash of boys’ underwear.

The material was reportedly Category A and B – penetration and sexual activity with an animal or sadism.

A serving officer, thought to be Watkinson, was arrested on July 9 last year for allegations of misconduct in public office.

As part of an investigation, the officer’s house was searched and this is reportedly when all the alleged child abuse content was discovered.

He was arrested 11 days later, for conspiracy to distribute indecent images of children, voyeurism and misconduct in public office, before being released on bail.

After a ‘lengthy and complex’ investigation, Watkinson was reportedly supposed to appear at a police station last Thursday.

When he did not show up, his colleagues went to his home and found him dead.

One former co-worker told The Sun Watkinson was worried he would be made to appear in court and named publicly.

They said: ‘He had been under huge mental strain while he was on bail and there were concerns that he was suicidal.

‘The worst fears for his health have now been realised and he was found dead last week. It is suspected he killed himself.’

The police have said the death is ‘unexplained’ but not suspicious. An inquest is due to take place.

Two other men were charged last week with conspiracy to distribute or show indecent images of children. Neither of them are police officers.