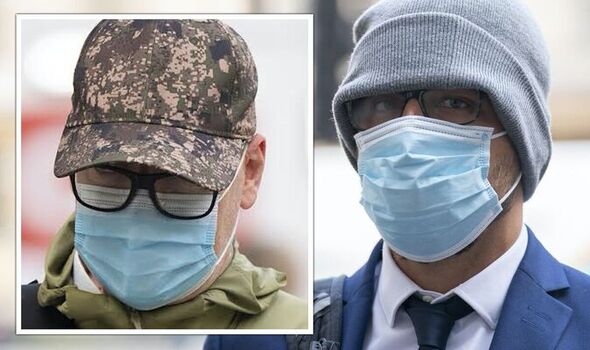 The two were found guilty of sending grossly offensive messages following an Independent Office for Police Conduct investigation into the sending and sharing or inappropriate messages on Whatsapp. Both men were charged with sending grossly offensive messages, of a racist and misogynist nature, in a group with Sarah Everard’s killer Wayne Couzens. They were each sentenced to three months’ imprisonment.

Another serving officer PC William Neville, 33, was cleared of sharing such material.

Couzens is currently serving a life sentence for the murder of Ms Everard in March 2021.

Cobban and Borders were members of a chat called “Bottle and Stoppers” on WhatsApp with Couzens, 49.

In the messages, the men joked about beating and sexually assaulting women and using firearms. Westminster Magistrates’ Court heard how they joked about raping a female colleague, talked about tasering children and people with disabilities, and displayed racist views in the group in 2019.

District Judge Sarah Turnock jailed Cobban and Borders for 12 weeks on Wednesday, saying she could not think of “more grossly offensive messages”. She bailed the pair ahead of an appeal against their convictions at the High Court.

The Met also issued a statement in which the force said it was “deeply sorry” for how the officers had “let down the public” and described their behaviour as “despicable”.

Commander Jon Savell, from the Met police department that includes professional standards, said: “We are determined to rid this organisation of those who corrupt its integrity and are increasing our efforts to do that more quickly.

“As a result, we may well see more cases emerging, as we leave no stone unturned in tackling offensive behaviour.”

DON’T MISS: Planning row settled as woman reveals top tips on how to fight back against councils
Man who threw petrol bomb at Dover migrant centre pictured and named for first time
Just how difficult is the UK Citizenship test Meghan found ‘so hard’? We gave it a go

The 49-year-old kidnapped Ms Everard as she walked home in Clapham, south London on March 3, 2021.

He told the marketing executive he was arresting her on breaches of COVID-19 regulations.

Couzens then drove to Ashford in Kent, where Ms Everard’s body was found in a woodland stream, just metres from land owned by Couzens, a week later.

He plead guilty to murder at the Old Bailey after being arrested at his home in Deal.