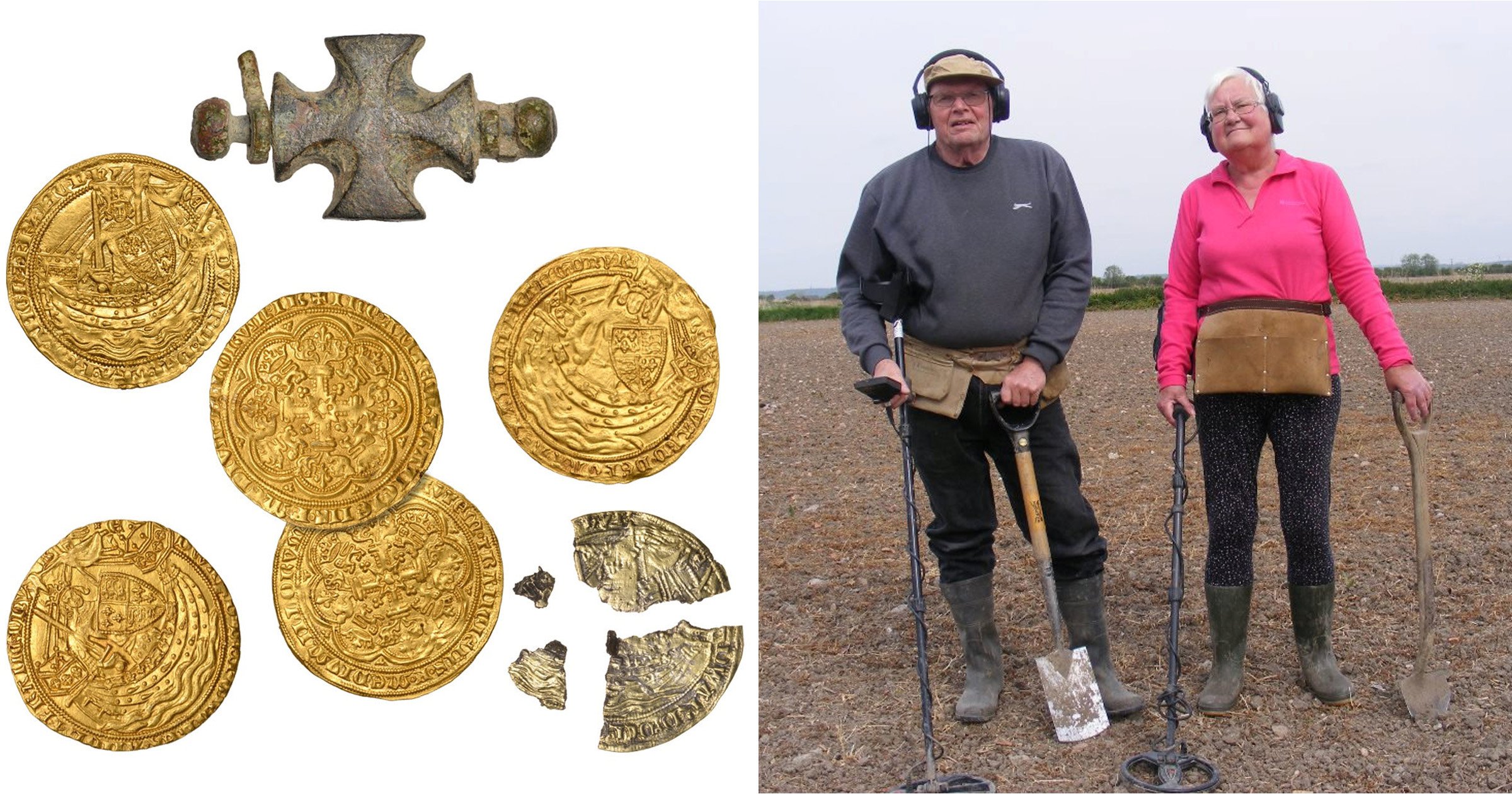 A couple in their 70s came across some medieval treasure while out with their metal detectors in one of their favourite fields.

Phil and Joan Castle discovered five rare gold coins dating back to the 14th Century which could fetch £15,000 at auction.

They were in great condition, hidden in a ploughed field near their home in New Romney, Kent.

Phil, 71, was having chemotherapy treatment when the pair stumbled upon a medieval brass purse bar eight inches underground.

He and wife Joan, 70, have been metal detecting together for more than 30 years and were checking one of their favourite fields when they made the find in October 2018.

When they were minted, the coins were the highest denomination in circulation with a face value of 6 shillings and 8 pence, which is about £2,500 per coin in today’s money, experts said.

They date back to the reign of King Edward III and are 3.4cm in diameter, depicting the Plantagenet monarch in a ship holding a sword and shield on one side and the royal cross on the other.

Joan initially found a broken gold coin on the surface of the soil, then another signal from the metal detector next to it revealed the 14th century brass purse bar below.

Mr Castle came over to help and found a gold coin.

Over the next two hours four more gold coins were uncovered in an area of around 16 feet.

However, the broken coin that was with the collection is a plated contemporary forgery, experts revealed.

Phil said: ‘We had no idea what the coins were when we found them. At the time, I was having chemo for leukaemia so detecting was a great relief.’

The former Woolwich Arsenal worker was introduced to the hobby by his wife, who used to search for fossils and mudlark on the River Thames – which is searching river mud for items of value or historical significance.

Joan is hoping the couple can buy a new kitchen with their share of the proceeds from the sale, which will be split with the landowner of the field where they were discovered.

Nigel Mills, consultant in artefacts and antiquities at Noonans auctioneers, said coins of this age are rare as they are usually silver rather than gold.

He added: ‘Purse hoards are not common and when they do turn up but they usually contain just silver coins so this one is special.

‘Apart from the broken coin which is a plated contemporary forgery, all five gold coins are in virtually mint state and must have been lost.’

The coins will be part of a specialist coin, medal, banknote and jewellery auctioneers at Noonans in Mayfair, central London, next Tuesday from 10am.