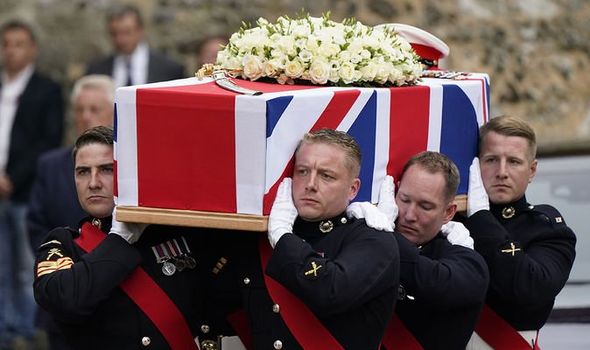 Maj Gen Matthew Holmes was laid to rest with full military honours yesterday. He was found dead at home on October 2 after losing his dream position as Commandant General and separating from Lea, his wife of 19 years.

Head of the Armed Forces Admiral Sir Tony Radakin and Defence Secretary Ben Wallace were among the 700 mourners, who also included service veterans.

Marines lined the route to Winchester Cathedral as Maj Gen Holmes’s widow with children Eleanor, 15, and William, 11, followed his coffin.

Four of the pallbearers and Maj Gen Holmes performed the same role at Prince Phillip’s funeral.

Maj Gen Holmes, 54, was appointed Companion of the Distinguished Service Order for leadership in Afghanistan. He also served in Northern Ireland, Kosovo and Iraq.

The opening of an inquest was told he took his own life, and Hampshire coroner Jason Pegg said it was thought the ex-commander of 42 Commando had had concerns about his marriage and his service career.

It is understood that a management restructure within the Armed Forces led to Maj Gen Holmes being superseded.