Iran's nuclear ambitions are a 'cause for concern' says expert

Speaking to BBC Newsnight’s Emily Maitlis, Mr Cleverly said he was “absolutely in favour of nuclear disarmament”. Under Government’s plans, which are part of a foreign policy review, the UK would increase its nuclear arsenal limit by 40 percent, to 260 warheads.

The increase could be in breach of the Treaty on the Non-Proliferation of Nuclear Weapons, which demands that member nations gradually reduce their stockpiles of nuclear arms under international law.

Mr Cleverly defended the Government’s adhesion to the agreement, but highlighted the importance of having an independent nuclear deterrent.

He said: “We should remember that the independent nuclear deterrent is and has been the cornerstone of our national defence – and indeed our collective Nato defence – for decades.

“In a world that is more dangerous and less predictable, it’s absolutely right that we maintain a credible independent nuclear deterrent and that’s what this is about”. 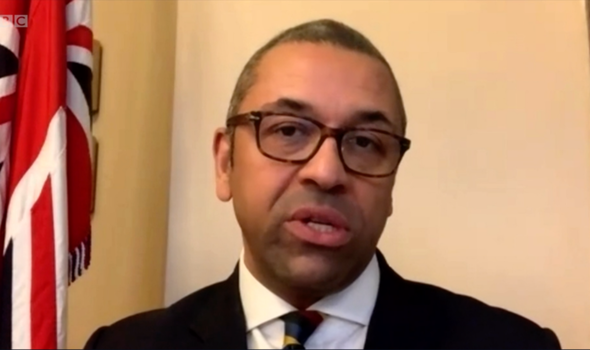 Ms Maitlis grilled the minister on whether raising the cap meant the UK was “no longer” complying with nuclear disarmament.

She said: “But you’d accept this is no longer disarmament.

“If you’re raising your cap, you can no longer say that Britain is in favour of nuclear disarmament.”

Mr Cleverly responded: “We are absolutely in favour of nuclear disarmament.

“But what I’ve always said is that unilateralism – which has been proposed by CND and others – is not the way to do this.”

He added: “We should remember that the UK has one of the smallest nuclear arsenals, a single system nuclear arsenal, considerably smaller than any other nuclear state, but we do contribute to the credible defence, nuclear defence, of Nato, ourselves and our allies.

Mr Cleverly’s remarks come after The Integrated Review warned Britain faces the risk of attacks from various sources with a new Counter Terrorism Operations Centre necessary to try and fight the threat.

The report reads: ”The terrorist threat in the UK remains all too real – whether Islamist-inspired, Northern Ireland-related or driven by other motivations.

“It is likely that a terrorist group will launch a successful chemical, biological or nuclear attack by 2030.”