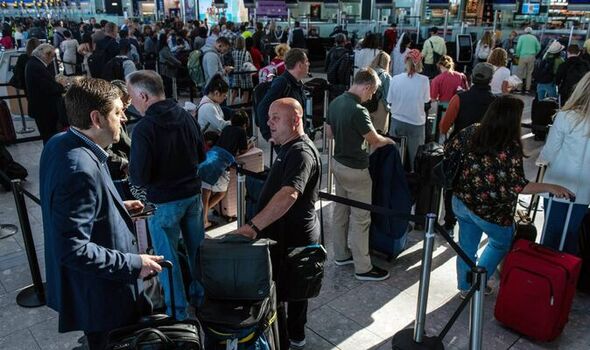 Business Minister Paul Scully made the suggestion as a ­solution to the UK’s ­holiday chaos. Travellers are facing a ­summer of stress after Gatwick Airport axed 4,000 flights and imposed its first ever cap on trip numbers in its 100-year history.

But Mr Scully said staff can “be more productive” during the holiday season.

He said: “We want to work really closely with the airports and the airlines to make sure that they are doing everything they can and see what more we can do.

“There is a record number of vacancies – 1.3 million vacancies across the country in all manner of sectors. But there are also people who ­recalibrated what they want to do when they were on furlough.

“We want to make sure that those people that are not necessarily working full-time, through Universal Credit we can get them back in to work to be more productive, if that suits them, and obviously match them up with the sectors where there are those vacancies.”

When asked whether this meant people working longer hours, he said: “I’m not talking about going out forcing people to do anything. But we just want to make sure that those people that want to work longer can do.”

Bosses at Gatwick stressed the drastic flight changes will help passengers “experience a more reliable and better standard of service”.

But it means 800,000 people will have to find alternative travel arrangements if they want to jet abroad in July and August.

Stewart Wingate, Gatwick’s chief executive, said that the cap was designed to combat high numbers of same-day cancellations by airlines.

He said his team had agreed the move with airlines such as easyJet and British Airways.

The Daily Express understands that no other major UK airport plans to follow Gatwick by axing hundreds of summer flights – to the relief of passengers.

It comes as airports struggle to fill swathes of roles, especially among security teams and baggage handlers.

Manchester Airport has seen chaotic queues, which continued yesterday. However, officials said they have no plans to ditch flights.

But holiday firm Tui have already cancelled “a limited number” of flights out of Manchester for July.

Andrew Flintham, managing director of Tui UK, said: “We are continuously reviewing the impact of supplier issues on our flying programme for the summer period and have made the difficult decision to cancel a small number of short-haul flights from Manchester in July.

“We have contacted all customers affected by these cancellations.”

London Stansted said they are operating as normal. At Heathrow, British Airways are thought to have shelved 10 per cent of their summer flights.

Since Easter, passengers have ­complained of “frustrating” queues leading outside airport terminals that have forced many to miss flights, lose hundreds of pounds and see holidays ruined or cancelled.

Nicole Venglovicova, 31, has missed three separate flights to Belfast from Heathrow and is concerned she will not get a refund of the £500 she has spent trying to sort air travel.

The freelance video producer, from London, said: “I had a meltdown. I was crying outside the airport out
of stress.”

At Manchester Airport, Mick Lyon, 39, said travelling home from Paris was “very frustrating” when passengers had to queue outside the terminal because passport control barriers were closed down.

Mick, from Liverpool, said: “I travel for work and fly most weeks and Manchester Airport is certainly the worst experience at any airport.”

Gatwick will now limit its number of daily flights to 825 in July and 850 in August, compared to a reported 900 daily flights during the same time period in previous years.

Rory Boland, editor of Which? Travel, said that “Gatwick must ­provide clarity” on exactly which of their flights will be among the 4,000 cancelled.

He explained: “Reducing the number of flights operating this summer may well be sensible in providing a more reliable service and fewer last-minute cancellations.

“But it certainly wasn’t sensible to make this announcement without first agreeing with airlines operating from Gatwick which flights would be cancelled.

“Passengers with trips booked are now in a panic about whether their flight will be one of those disrupted.”

EasyJet, which axed 40 flights a day in June, said it hopes to “reaccommodate the majority of customers” should their flights be affected by Gatwick’s cap.

A Tui statement said: “Tui Airways flights have been operating well from Gatwick and we therefore plan on operating all flights as planned this summer.”

John Holland-Kaye, chief executive of Heathrow, believes it will be 12 to 18 months before the industry can get its capacity back to pre-pandemic operating levels.

Downing Street welcomed Gatwick reducing flights “so they can realistically deliver over the summer”.

A No 10 spokesman said: “We want everybody to be able to travel freely and easily.

“This is why we continue to encourage industry to step up their recruitment so they can put on enough flights for families who are looking forward to well-deserved holidays after the pandemic.”

Why is it all going so horribly wrong for Britons’ summer holidays abroad by air?

As you might have heard, it’s a perfect storm following two years of travel chaos caused by Covid.

Is all this anybody’s fault? Yes and no.

Avoidable? Yes and no.

The UK travel industry was poorly treated by the Government during Covid.

As a result, airport and airline employees were made redundant in their tens of thousands after businesses scrambled for survival.

Airport staff must have security clearance from the Government and the Civil Aviation Authority with a vetting process that takes time and seems to be delayed.

Clearly, firing takes less time than hiring – and you cannot have non-approved people working in airports.

Also, many people left the aviation industry over the last two years and found jobs that are better paid without split shifts or anti-social hours.

Complicating all this is the fact airlines are contractually obliged to fill a hefty 70 per cent of their precious airport take-off and landing slots or risk having to give them up.

Consequently, UK firms have no choice but to try to operate schedules at these levels, despite a lack of staff.

When, earlier this month, Transport Secretary Grant Shapps accused carriers and tour operators of overselling flights and holidays, he seemed to be forgetting his own department’s rule book on how many flights it stipulates UK airlines must operate (it raised it from 50 per cent on March 27).

Despite these issues, it was blindingly obvious that a nation which loves foreign sunshine on summer holidays would stampede for terminals from Exeter to Aberdeen after restrictions were lifted and it does very much look like the wider aviation industry was largely ill-prepared for that.