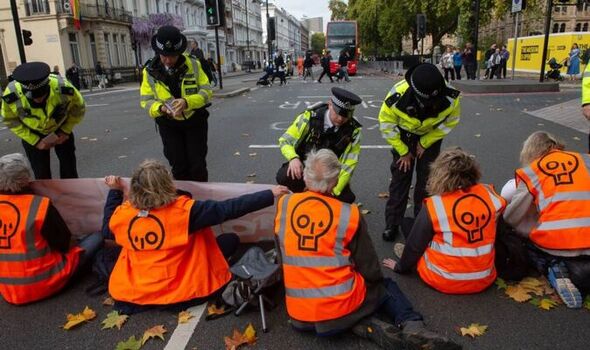 Ministers should also close legal loopholes that allow activists to disrupt our roads and damage buildings, it said. The protest tactics, which have seen demonstrators glue themselves to highways, have provoked widespread anger in recent years.

It also calls for Parliament to bring in legislation that will reverse a 2021 Supreme Court judgment that is leaving police forces hamstrung from acting quickly to prevent disruption.

The report warns: “The Met should be acting more quickly to remove protesters, with other police forces also still taking far too long to act.

“Sentencing and bail guidelines must also be overhauled. One protester has boasted of being arrested on 16 different occasions.”

David Spencer, head of crime at Policy Exchange, said: “These extremists cannot be allowed to continue making their points in this way.

“Parliament, the courts and the police must act to bring the criminal actions to an immediate end.”

Protests by Just Stop Oil during the past month have resulted in 8,000 frontline police shifts being diverted from fighting crime in local communities, according to Policy Exchange.

A Just Stop Oil spokesman said: “The people supporting Just Stop Oil, to the point of arrest and imprisonment, are acting to protect our freedoms, rights and our democracy.

“Politics has failed us, the state doesn’t need new powers. It can end the disruption today by agreeing to end new oil and gas.”