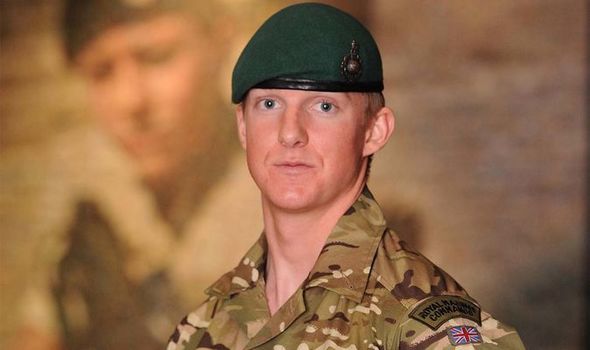 Corporal Alexander Tostevin, 28, was with the Special Boat Service when he died at his home in March 2018. The MoD had tried to prevent the public identification of the unit he was serving with when it is thought he took his own life, it was said.

But the attempts were rejected by the coroner.

Speaking afterwards, the Tostevin family’s solicitor, Jocelyn Cockburn, from Hodge Jones & Allen, said: “The conduct of the Ministry of Defence has been appalling.

“They have tied up the court and family over the past three years with legal representations designed to prevent scrutiny of medical care that Alex received while serving as a corporal in the Special Boat Service.

“On Friday, in a letter to the coroner, the family felt compelled to call out the conduct of the MoD for what it was – an attempt to bully the coroner to overturn his rulings and restrict reporting of the unit in which Alex served.

“Today, the MoD capitulated and removed its threat of a judicial review challenge.

“This shows their stated concerns about national security and safety were nothing more than tactics deployed to control these inquest proceedings.

“The family do not want the inquest to be hijacked by the MoD’s tactics and are pleased that this conduct has been today exposed for what it is – a discreditable attempt to close down this inquest.”

Cpl Tostevin had been decorated for bravery after saving the lives of British troops in battle against the Taliban in 2010.

The MoD had twice made applications to prevent the special forces unit being publicly identified and, on both occasions, Brendan Allen, area coroner for Dorset, rejected them, saying the openness of proceedings would be affected.

He said: “The unit with whom Alex served is relevant and of legitimate public interest. It is relevant that these events occurred at a time when he was vulnerable due to the deterioration in his mental health.”

On the eve of the inquest resuming, lawyers for the MoD attempted to persuade the coroner to “hold the ring”, by maintaining his reporting restrictions and not have military witnesses confirm or deny Cpl Tostevin’s membership of the SBS until he had reached his final conclusions. Kirsten Heaven, representing the Tostevin family, said they were “deeply shocked” on the eve of the inquest at the MoD’s “full frontal attack”.

She said: “The family have waited a very long time for this inquest and would not want it to go ahead with any fudge or compromise or threat of judicial review hanging over at the end.

“That is the worst of all worlds for the family.”

The MoD confirmed it would not be pursuing a judicial review and the inquest would continue, with the first witnesses due to give evidence today.

The inquest is taking place at Bournemouth Town Hall. Cpl Tostevin was with the SBS, based in Poole, Dorset, when he died.