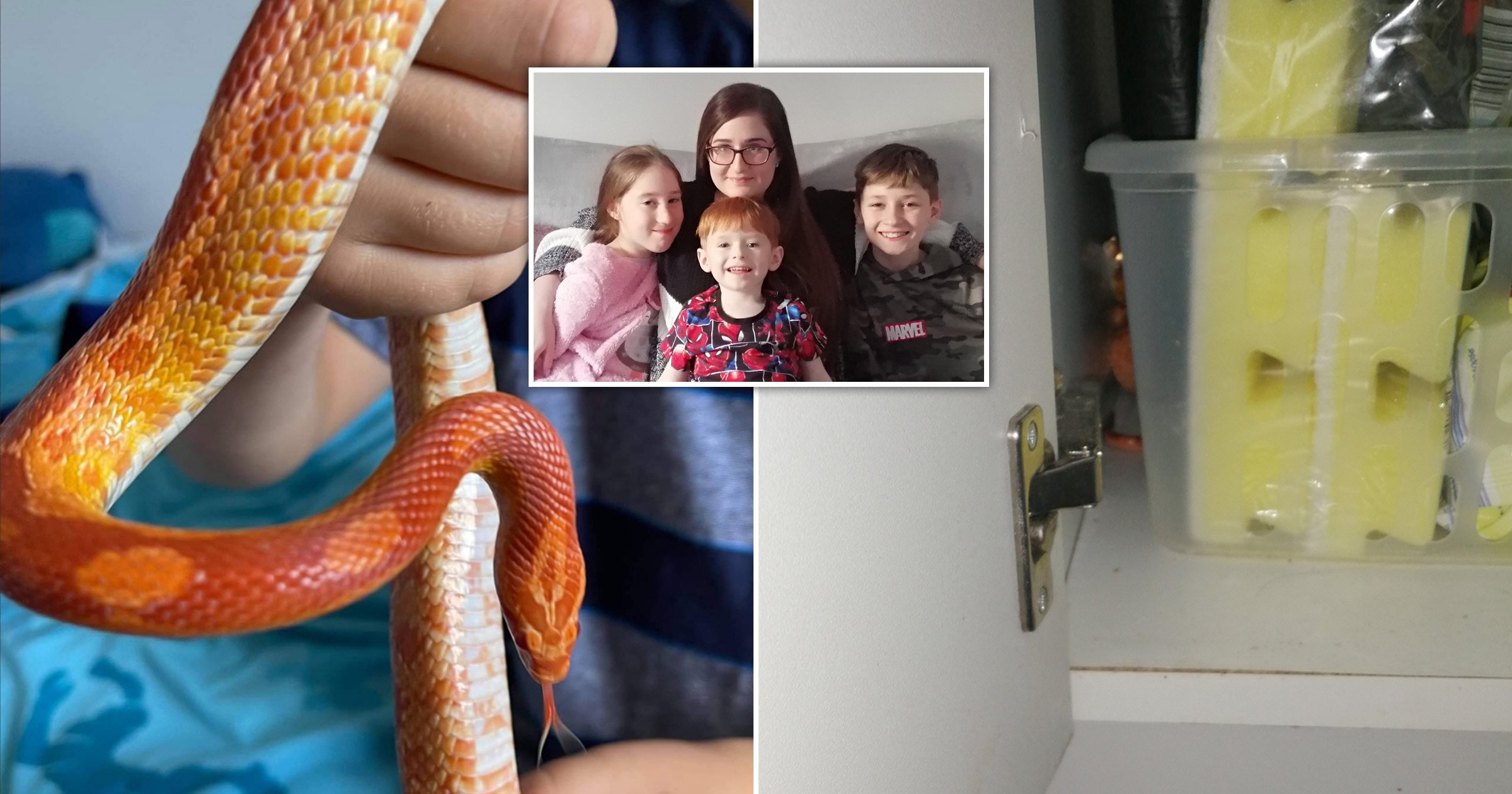 A mum-of-three screamed when she found a bright orange snake in her cupboard at home in Kent.

Liz French, 33, was cleaning the house on Saturday and saw the reptile staring back at her as she went to grab some more products.

The yellow corn snake called Kobe had not travelled far – as it emerged it was her neighbour’s missing pet.

Kobe hadn’t been seen for more than two months after slithering out of his vivarium in Ramsgate on June 1.

Full-time mum Liz said: ‘My neighbour sent me a message at the beginning of June to let me know he had lost his snake and he asked me to keep an eye out for it.

‘I didn’t think for one second it would turn up at my house.

‘I was doing the usual clean on a Saturday when I went into my cleaning cupboard under the kitchen sink for some floor cleaner when I saw something move.

‘I panicked and screamed, but then I calmed down and called my Dad who lives with my sister who owns snakes.

‘He told me corn snakes aren’t dangerous and to try and get him into a pot, so I grabbed the nearest thing which was an old Quality Street tin.’

While her Dad was unconcerned about its threat to humans, the snake should have had no problems fending for itself over the summer.

Corn snakes catch their prey by constriction before often swallowing it whole, and have been known to climb trees and roam abandoned buildings in search of their next meal.

Liz guessed that Kobe could have made himself a home in her house for a whole month.

He has now been reunited with his owners, but only after putting up a struggle to Liz’s attempts to get him into the chocolate tin.

She said: ‘I tried to lure him into the tub, but he wasn’t going so my Dad told me I would have to pick him up.

‘I didn’t want to lose him again, so I did it and they’re surprisingly strong.

‘Once I got the tail in, his head would pop out and so on! It was like a clip out of a comedy show.

‘It tried to fight to get away under the washing machine, but I wanted to catch him to give back to my neighbour because I knew they had been missing him.

‘Our neighbour was so excited and grateful that we had found him.

‘My three-year-old was really happy that the snake was orange – the same colour as his hair.

‘As it’s been quite warm, we’ve had the back door open a lot so we think he could have come in that way, but we might have been living with him in the house for a month.’