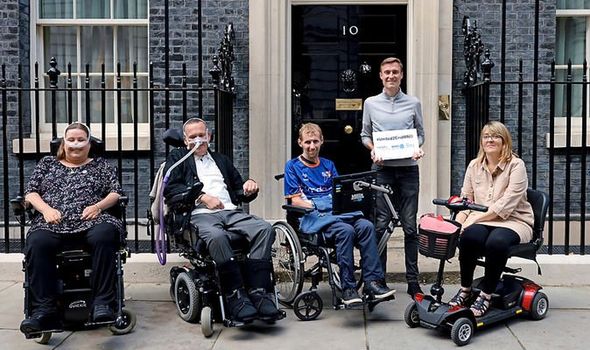 David Setters and Lee Millard both have a slowly progressing form of the debilitating disease that affects the brain and nerves, eventually leaving sufferers locked in failing bodies. But they reject any notion that they are “heroes” for being the driving force behind a two-year funding campaign to find a cure for the terminal condition, now set to change the lives of thousands of MND patients and their families.

David, who was diagnosed nine years ago, said: “I don’t like being called a hero. We are really lucky to be around longer than most other patients, so I think it is our duty to do stuff like this.”

Lee, who has had MND for seven years, agreed, saying: “It is our duty. It is so rare for people (with MND) to be able to advocate because they just die.”

David, 64, said: “If you are one of the 50 percent of people that go down within two years you would not have the time to do this.

“There is an element of survivor’s guilt that drives you on to make things happen. Also, I think we are driven by younger people getting it who have children.

“This is like a therapy for us ‑ what else would we be doing?”

Prime Minister Boris Johnson announced last Sunday in this newspaper £50million of funding over five years to set up an MND Research Institute to co-ordinate efforts to find effective treatments for the disease.

Leading neurologists say this will accelerate highly promising research already taking place across the UK and could lead to a cure within five to 10 years, as opposed to many decades.

David said: “I must admit we were totally shocked, gobsmacked by the sudden decision.

“The news was hugely emotional for both of us because of our involvement. Sorry, I am welling up again.

“We have had so many messages over the last week.” The Sunday Express launched the Fund The Fight To Cure MND crusade in June.

It joined the United To End MND campaign and brought together the MND Association, MND Scotland and My Name’5 Doddie Foundation.

The United To End MND campaign had a humble beginning with David and Lee, who have been friends since 2016, having a long exchange on social media about MND, their lives and football. They first met at a reception at Parliament for an MND benefits campaign.

Lee, 58, said: “We have been good friends ever since. Unfortunately Dave is a Manchester United fan but even worse, I am an Arsenal fan.”

David said: “We wind each other up and get each other moving on campaigns and what is going on. I like to say Lee is our chief scientific officer and I am our information officer.”

During one of their exchanges in September 2019 they spoke about a man living near Lee in West Sussex who had recently been diagnosed with the disease and worked in NHS research.

The father-of-one from Chichester, who writes the onein300 blog on research into MND from a layman’s point of view, told Lee MND was not being mentioned in funding pitches to government.

David, a grandfather-of-one who has three sons from Redhill, Surrey, said they spoke to Professor Ammar Al-Chalabi, director of the MND Care and Research Centre at King’s College London, who welcomed their idea for a campaign.

Lee worked with Prof Al-Chalabi, Prof Chris McDermott from Sheffield University and other leading researchers to come up with a detailed plan containing work packages for the £50million funding.

Doddie, 51, who set up his foundation after being diagnosed with the disease in 2017, launched the funding appeal with a briefing document ‑ which was sent to the Government ‑ on BBC Breakfast in November last year.

At the start of this year patients Emma Moss, who blogs as Mummy With MND, Nicola Waters, who had been a senior civil servant and Chris Johnson, former Assistant Chief Constable of West Midlands Police, joined Lee and David in working with the charities and researchers.

A petition which reached 110,000 signatures then triggered a debate on the funding proposal in the Commons in July, which attracted cross-party support.

David said: “From there we started building our submission to the Government public spending review in October.

“We also started organising a September 21 delegation to Downing Street to hand over a letter from hundreds of patients.

“The Sunday Express coming on board four months ago was also hugely important.”

He added: “Everything was building and then we had the disappointment of not getting the funding in the spending review last month. But there were still suggestions from advisers to ministers that they were asking civil servants to get something done.”

After celebrating the news that their campaign had been successful for the past week’, the duo are now determined to keep working to move research forward as quickly as possible and make sure the Government honours its vow.

He said: “To use a sporting analogy, I would liken it to being like a batsman who gets to his 100, celebrates and points to the dressing room. But then asks the umpire for a new guard and gets set for the next 100.

“We were delighted that Boris Johnson put his name behind it.

“But we need to make sure that it is new money.

“As ever, with 50 percent of people with MND dying within two years, we cannot rest on our laurels too long.

“It’s fantastically good news but we need to get things moving as quickly as we can.” Lee added: ‘We would both like to thank our wives for the support they have given us.

“If it wasn’t for them none of this would have happened’.”

David, who is married to Helen, said: “Although I have still got my voice I have not got the use of my arms or legs, so I need 24/7 care and Lee also needs major care.”

Lee, whose wife is Jean, added: “I cannot go anywhere without major plans.”