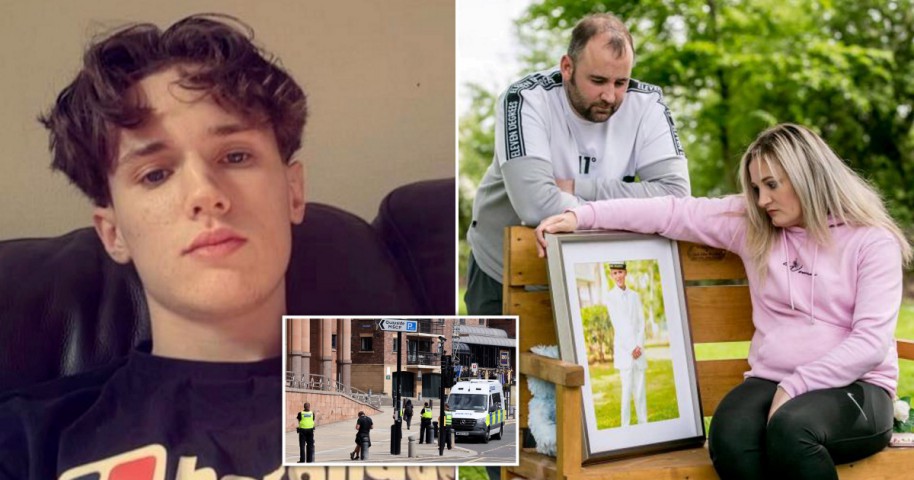 A pack of 10 teenagers who hunted down an 18-year-old and murdered him as he walked home from a funfair simply for the thrill of seriously hurting a stranger have been jailed for life.

Jack Woodley was ‘surrounded and isolated’ by the gang after they chased him down an alleyway in Houghton le Spring, Sunderland, last year.

He was punched, kicked, and stamped on before one of the cowardly killers pulled out a 25cm ‘Rambo style’ knife and plunged it into his back on October 16.

Mobile phone footage of the attack showed one of them shouting ‘get the chopper’ – referring to the blade – moments before the fatal blow was inflicted.

Prosecutors said the group had gone out ‘looking for serious trouble that day’ and tried to ‘create conflict’ with Mr Woodley at the festival as they ‘looked for any excuse to attack someone’.

On Friday, the 15-year-old who inflicted the fatal wound was detained for a minimum of 17 years.

Judge Rodney Jameson QC sentenced the other nine defendants, aged between 14 and 18, to minimum terms of between eight and 15 years’ detention.

He told them that if they are then released, they will remain on licence for the rest of their lives.

The total minimum terms for all the defendants adds up to 124 years and six months.

Nine of the youths, who cannot be named for legal reasons, had denied murder and manslaughter.

One pleaded guilty to manslaughter, admitting he stabbed Mr Woodley but denying he intended to kill him, Newcastle Crown Court heard.

Mark McKone QC, prosecuting, told jurors that while only one youth stabbed Mr Woodley, the other nine were guilty due to ‘the concept of joint enterprise’.

Each intends to appeal against their convictions, the Crown Prosecution Service confirmed this week.

Sentencing the group, the judge said: ‘No sentence can restore Jack to his family and loved ones, or reduce the pain they will endure now and in the future.

‘It may seem unfair that you will be able to live at liberty while still young men, while Jack cannot because of what you did.’

‘The trauma of reliving this whole incident over a long trial has had a devastating effect on us all. We cannot see a way of recovering from this. We feel imprisoned by our grief and trauma.

‘No parent, loved one or friend should suffer someone going to a fair and them forever.

‘We will never be able to share treasured family moments with our “cheeky chappy blue-eyed boy” ever again.’

Judge Jameson said Mr Woodley had been due to start a job the Monday after he was attacked and was on the way to pick up keys for a new flat, saying he had ‘much to look forward to’.

He said the group had attacked Mr Woodley ‘solely for the excitement and pleasure of inflicting serious injury on an entirely innocent and randomly selected stranger’.

The judge told the defendants the violence inflicted on Mr Woodley ‘though short-lived, was appalling’ and all of them ‘played a part in causing Jack’s death’.

He said six of the teenagers had given evidence during the trial, but none ‘was prepared to tell the truth about what the others did’.

The judge told them: ‘You decided to put the interests of yourself and your co-defendants before those of Jack and his family. You did everything you could to deny them justice.

‘I’m sure you do regret what happened for many reasons, but regret is not remorse.’

Judge Jameson told the teenager who stabbed Mr Woodley: ‘I have concluded that you intended to kill when you inflicted the second stab wound. I accept that intention may have been formed in the heat of the moment.

‘It is, however, that sort of escalation that can occur when violence is carried out mob-handed and when armed with a deadly knife.’

During the trial, Mr McKone said Mr Woodley was leaving the Houghton Feast funfair when the defendants, who he did not know, ‘surrounded and isolated’ him.

One of the teenagers first put Mr Woodley in a headlock and punched him, before the others ‘joined in’, the court heard.