Johnson announces army to be deployed in Blackburn and Bolton

There remain growing concerns over delays and the success of the programme, it was said. The tanks are so loud troops had to wear ear defenders and undergo hearing tests afterwards. They are also unable to reverse over objects 20cm high, experts said. But General Dynamics, the US company making the tanks for the British Army, claimed recent trials have shown progress. Defence chiefs halted trials for four months following complaints that crews were suffering from temporary hearing loss and aching joints.

These trials restarted in March, the Ministry of Defence said.

General Dynamics is assembling the vehicles in Merthyr Tydfil, Wales. But so far only 14 of the 589 have been delivered for trial.

A defence source said: “It was no secret that the programme, that was originally contracted in 2010 and 2014, has had problems, which is why the MoD has intensified scrutiny and work to rectify the issues.

“The Army, General Dynamics and the MoD is now engaged in an intensive round of assessments and rectification work to resolve any outstanding issues.”

He said we are “cutting our tank numbers”, and “building the Ajax which, at 43 tons, is so heavy no RAF plane can carry it without partial dismantling”. 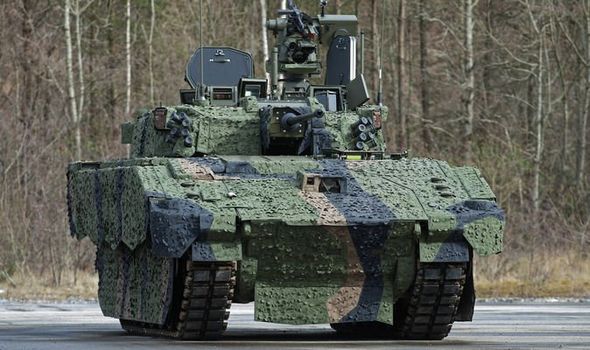 Other problems with the new Ajax range include an inability to fire cannons on the move. The speed restrictions had been caused by excessive vibrations in the tanks, with crews limited to 90 minutes inside them at a time.

But General Dynamics said in a statement: “We continue to work closely with the British Army and Ministry of Defence to complete the remaining demonstration phase activities.

“A small number of remaining issues are being reviewed and closed out in partnership with the British Army.”

An MoD spokesman said: “We are committed to the Ajax programme, which will form a key component in the Army’s modernised war-fighting division, with current plans for initial operating capability scheduled for summer 2021.

“The MoD can confirm some training on the Ajax vehicles was paused as a precautionary measure. This is a normal measure for the demonstration phase of projects.

“The health and safety of our personnel is of the utmost importance.”