A teenage boy heroically lifted a truck to save his father who was trapped underneath.

Dalin Wilkinson, 15, rushed to his father Matthew Wilkinson’s rescue after the vehicle fell on him as he was working on it.

‘It just dropped right on him. I was scared. I heard him make a noise like his soul was leaving his body. It was crazy,’ Dalin told KCRA this week.

‘I just ran over and tried as hard as I could to get it up enough to get him out.’ 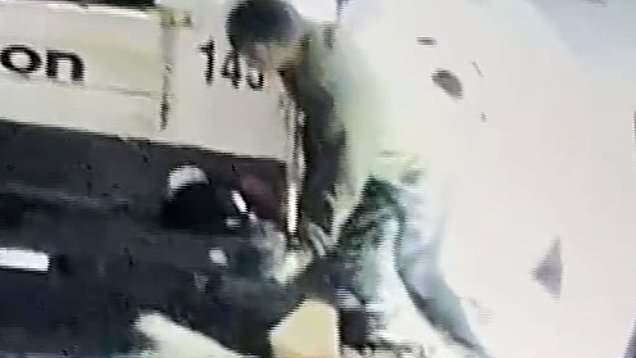 It wasn’t until Matthew watched footage from his family’s security cameras that he realized what had happened. The video shows his son using all his strength to lift up the vehicle, allowing his father to break free.

Matthew began working on the brakes of his truck after getting home late on a Monday earlier this month because he could not put it off any longer. His teenage son checked on him and began helping. The dad said he had fixed his vehicle multiple times in the past, but that the rotor was stuck on that occassion.

‘I couldn’t get a good angle, so I slid my body underneath the truck and was hitting it,’ Matthew said.

‘The second it popped off, the truck fell. I know it rolled forward because I saw it roll forward and it fell right on top of me.

‘All I could think about was the breath coming out of me. I was just squished. I couldn’t talk. I couldn’t yell.’

‘All this time in the hospital, I’m trying to figure out how did I get out from under the truck,’ the father said.

‘I called my kid and had him look at them, look at the surveillance camera and they realized that he had lifted the truck enough for me to roll out.’

Dalin, a freshman at Oakdale High School in California, had helped his father work on the vehicle on prior occasions before the frightful incident.