After a lengthy interview with the European Research Group member in the Palace of Westminster’s Central Lobby, reporter Cathy Newman enquired of the famously traditional Conservative: “Just because you’re here in front of me – have you ever taken drugs?” Laughing, Mr Rees-Mogg replied instantly: “No, of course, I haven’t!” But then he fired the question back at unsuspecting Ms Newman – who floundered before refusing to deny it.

Cracking up, she paused before answering: “I’m not running for office!”

Mr Rees-Mogg picked up on the ambiguity instantly, giggling: “Ah. So that’s no comment.

Ms Newman proceeded to quickly terminate the interview there, turning to the camera and blurting: “Jacob Rees-Mogg: thank you very much for joining me.” 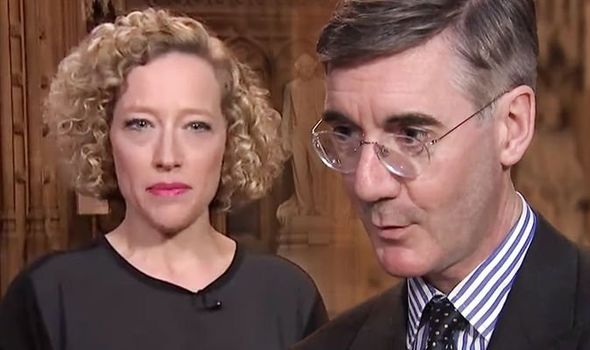 The question came off the back of the revelation that seven of the ten candidates running in the Tory leadership contest have taken drugs in their youth.

The most controversial of these was Michael Gove’s admission to taking cocaine as a young journalist – before writing an article pushing for its criminalisation.

The Environment Secretary said he used the drug 20 years ago and branded it “a mistake”.

It comes after fellow Tory contender Rory Stewart apologised for smoking opium at a wedding in Iran.

Mr Gove told the Daily Mail: “I took drugs on several occasions at social events more than 20 years ago.

“At the time I was a young journalist. It was a mistake. I look back and think ‘I wish I hadn’t done that’.”

He added: “It was 20 years ago and yes, it was a mistake. But I don’t believe that past mistakes disqualify you.”

Speaking to Sky News last week, International Development Secretary Mr Stewart said: “I think it was a very stupid mistake and I did it 15 years ago, and I actually went on in Iran to see the damage that opium was doing to communities.”

He added: “I’ve seen it as a prisons minister. It was something that was very wrong, I made a stupid mistake.

“I was at a wedding in a large community meeting and somebody passed this pipe around the room and I smoked it – I shouldn’t have done, I was wrong.”

Commenting on Tory leadership hopeful Michael Gove’s admission about taking cocaine, Jeremy Corbyn said: “Well, he has decided to tell us what his past was like, that’s his business.”

Asked if he believed mistakes in the past should disqualify potential leadership candidates, the Labour leader said: “No, I think people should tell us what they have done and move on in life.

“But I’m unconcerned about Michael Gove’s past life or behaviour to be quite honest.”

Asked whether he had taken drugs in the past, Mr Corbyn said: “No, I’ve led a very normal life in many ways.”