A man who brutally beat a 12-year-old boy with a single crutch is being hunted by police.

Surveillance footage shows a man holding one crutch and running to the corner of a sidewalk and taking two gigantic swings at a victim, who is not in the frame. The suspect gears up for a third swing, but the victim appears to flee and be just out of his range.

‘WANTED for ASSAULT: Do you know this guy?’ tweeted the New York Police Department on Wednesday morning, along with the video.

It happened around 7.38am last Thursday on the corner of St Paul’s Place and St Paul’s Ct near Prospect Park in Brooklyn. 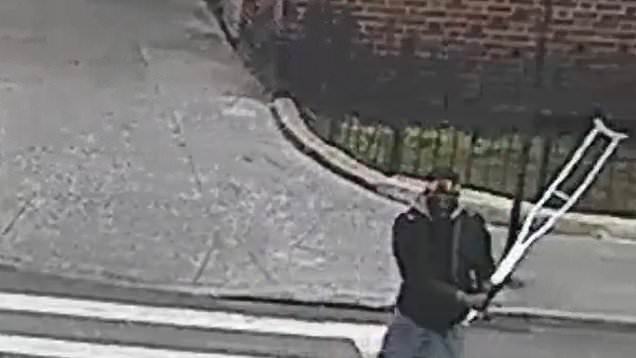 ‘The suspect, unprovoked, struck a 12-year-old male multiple times with a crutch before fleeing,’ the police department wrote.

While beating the victim, the suspect mumbled something that was not comprehensible, police said. The man walked away from the scene calmly, left the crutch on the sidewalk and went north on St Paul’s Place.

The boy was going to Church Avenue B and the Q train station when he was attacked. He sustained minor head injuries and was transported to an urgent care center in stable condition.

As of Wednesday morning, the suspect was still at large.

The suspect is described as having a dark complexion, medium build and a beard. He wore a black jacket over a yellow hoodie, a black beanie, sunglasses, blue jeans and black shoes.

Anyone with information is urged to contact the police department.