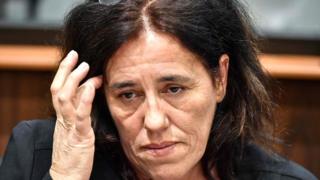 A French woman has gone on trial accused of hiding the existence of a child she kept in the boot of her car.

The girl was discovered by a garage mechanic who heard noises when the car was brought in for repairs.

The mother is charged with repeated violence against a minor causing permanent disability, and faces up to 20 years in prison.

She is said to have hidden the pregnancy and birth from her partner and three older children.

Rosa-Maria Da Cruz, who is being tried in the central city of Tulle, called the baby Serena and kept her in a room in her house and in the boot of her car.

When she was found in 2013 in Terrasson-Lavilledieu in the Dordogne region, the child, who was thought to be about two years old, was malnourished and displaying severe developmental problems, reports say.

The garage mechanic who discovered the girl said he was greeted by an unpleasant smell when he opened the boot to discover a pale, feverish child, lying naked in her own excrement.

Portuguese-born Ms Da Cruz, who is now 50, is said to have told investigators about her daughter at the time: “Not a baby but a thing (…), a thing that had to be discovered to live”, a child “to whom she started talking at the age of 18 months, because she had smiled [to her]”.

The girl, who is now nearly seven, is in foster care.

Her two brothers and sister, aged nine to 15, were returned to the couple after being placed in foster care for a time.

The case against Ms Da Cruz’s partner, who denied knowing anything about the pregnancy or the baby, has been dismissed.

The trial is expected to last between five and seven days.