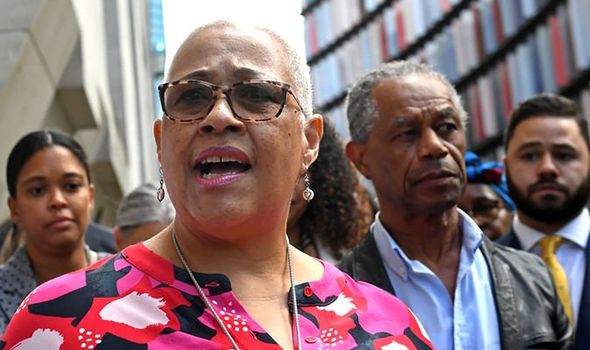 Wilhelmina Smallman’s daughters Bibaa Henry and Nicole Smallman were stabbed to death by Danyal Hussein, 19, in June 2020. The bodies of Nicole, 27, and Bibaa, 46, were found intertwined in Fryent Country Park in Brent, north London.

Wilhelmina, 64, said Sarah’s mother’s victim impact statement, read out before the sentencing of killer police officer Wayne Couzens, took her and husband Chris “back” to their court case.

She said: “It’s the only opportunity you get to share what you feel. I think it’s very valuable, but it also is an opportunity for you to reflect on that journey.

“They lost their humanity, otherwise they never could have done what they did to their victims.

“I hope at some point I get an opportunity to meet with Sarah’s parents, because we’re such a really small and select group of individuals.

“No one expects to outlive their children. There is something different about your children being murdered, and knowing that their last few moments of life they spent in absolute terror.”

Wilhelmina, a former archdeacon of Southend, said she would like Sarah’s mother, Susan, to know that she thinks of her.

She added: “I just want to say that I think of her often, of her mum. And don’t suffer in silence because there comes the time when everybody else has to get on with their lives.

“I know all the parents who have lost children, as we have. You’re in our thoughts and our prayers.”

Describing her daughters as “amazing”, Wilhelmina said she and her family “can’t move on” until Hussein is sentenced later this month.

The killer was said to have pledged to make human sacrifices in a twisted ‘deal with the Devil’, in the hope of winning the lottery in return for his actions.

The sisters had been out celebrating Bibaa’s birthday that evening.

After their bodies were found, two Met Police officers are alleged to have taken selfies with them.

PC Deniz Jaffer, 47, and PC Jamie Lewis, 32, have both been charged with misconduct in a public office and are awaiting trial.

This week, the Home Secretary said “enough is enough” when it comes to violence against women and girls.

For those of us working on the front line, these are welcome words. But words alone will not keep women safe. That’s why Refuge has launched its Enough is Enough campaign, which is calling on the Home Secretary to amend the Police, Crime, Sentencing and Courts Bill so it includes domestic abuse, sexual violence, and domestic homicide in the Serious Violence Duty.

In England and Wales, two women a week are killed by a current or ex partner and one in four will experience domestic abuse in their life.

According to the Femicide Census, since 2009, 16 women have lost their lives to violence where the perpetrator was a serving or former police officer. One of those women was Sarah Everard. And while we have seen political progress in addressing these matters the response remains inadequate.

For Sarah, for Sabina, for every woman whose life has been lost to male violence, we will not stop fighting for justice and for change. Enough is enough.