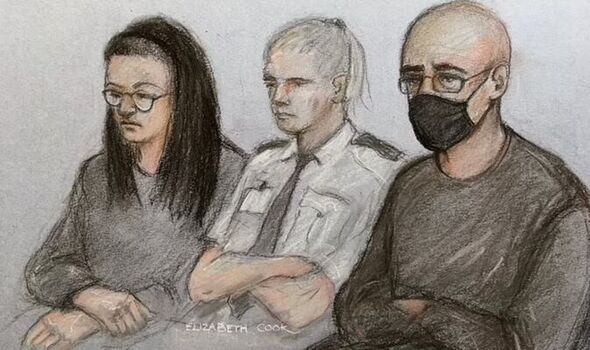 Angharad Williamson, 30, played the part of an anguished mum to the “best of her acting abilities” in a bid to cover up her role in the little boy’s death, it was alleged. The jury heard she phoned police to report her son missing after he had been beaten to death and dumped in a river like “fly-tipped rubbish”.

Prosecutor Caroline Rees QC said it was a “calculated plot to manipulate and mislead police, friends and family”. She added that the truth was revealed by CCTV footage.

Ms Rees said it showed Logan’s body being carried from the family home by Williamson’s partner John Cole, 40, and a 14-year-old boy.

Lights going on and off in the house meant she was awake at the time, Cardiff Crown Court was told.

Ms Rees said: “It might sound like a heartfelt call of distress from a mother reporting her child missing.

“But with knowledge of the CCTV and the proof she knew exactly what was going on that night, the prosecution say the 999 call is in fact chilling.

“It demonstrates the extent to which Williamson was prepared to lie and her ability to put on a performance to save her own skin, even when dealing with the death of her five-year-old child.” Williamson, Cole, both of Sarn, Bridgend, and the teenager, who cannot be named, deny murder between July 28 and August 1 last year.

Logan was found dead in the River Ogmore near his home a short time after the 999 call on July 31. He had suffered 56 wounds, including severe trauma to the head. They were compared by doctors to injuries suffered by high-speed car crash victims.

Some were old, including a fractured collar bone, suggesting he was beaten over a period of time, the court heard, and he may have been alive for hours after the final assault.

The court heard how Logan’s body was found by a police officer, leading to Williamson weeping so loudly that the judge ordered the dock microphone be muted. The jury was also told that Cole allegedly told a prison guard he had a “moral dilemma”, while Williamson wrote a letter claiming Cole killed her son.

The youth is alleged to have been heard by one care worker singing: “I ******* love kids, I love to punch kids in the head, it’s orgasmic.” And to another: “I did some bad stuff but I’m not allowed to talk about it.”