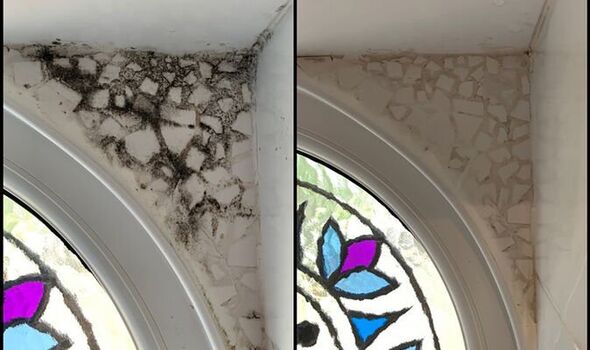 When her Amazon parcel arrived, she was eager to see the spray which people have been raving about – but was surprised by how “underwhelming” it looked.

HG Mould Remover is said to eliminates mould from indoor and outdoor surfaces. The spray, which has over 19,000 five star reviews on Amazon, is available to buy for £5.25.

She said: “When it arrived in a plain looking black and white bottle it looked a bit underwhelming, but with more than 24,000 Amazon reviews and a star rating of 4.6 out of 5, and hundreds of devotees on cleaning forums and Facebook groups who was I to judge a book by its cover?”

Narin explained that mould had been growing on her bathroom ceiling, tiles and grout for years before she and her partner had moved into the house.

Experts explained that the reason why the mould had become so bad was due to them not having a functioning window or a working extractor fan and radiator.

Narin said: “The bathroom window has never opened while both the heated towel rail and extractor fan were broken from the day we moved in.

“After a cold winter it’s fair to say that our feature window, now with black mould between all the grouting, was a feature for all the wrong reasons.”

After finally getting someone to fix the towel rail and install a new extractor fan, Narin decided to try and banish the mould once and for all.

She said: “I envisaged a few hours of faff, rubber gloves, and a lot of elbow grease. Little did I know.

“Having taken the before photos I put on some rubber gloves and made sure I’d taken off my favourite cardigan just in case, the spray does contain bleach after all, and then liberally sprayed it around the window and on the mouldy patches of the ceiling.”

“While the HG BBQ spray which I’ve used previously foams up and sticks to the surfaces it’s cleaning, the mould spray is very runny.

“So you can give it a good spray but I had a large handful of kitchen roll in the other hand to mop up the puddles that dripped down onto the window ledge once I’d finished applying it – and if you’ve got any nearby towels or anything you’re worried about getting bleach on you’re probably wise to move them out of the way.

“Also, as a word of warning, it definitely smells strong and (unsurprisingly) bleach like. As someone with mild asthma I didn’t hang about once I’d sprayed it and, ironically, if my bathroom window did actually open I would have made sure it was throughout the process.

Once she had finished applying the product, Narin stepped away for half an hour, and upon her return she was “genuinely amazed” at the results.

She added: “I stepped away for half an hour, expecting that on my return I’d have to use a cloth to fully tackle the mould once the spray had soaked in.

“When I came back I was actually genuinely amazed. Without even having to wipe at it the mould was gone. It was incredible and frankly a cleaning revelation.

“It might be a sign that I’m old but the joy I got from seeing my bathroom free of black marks and gleaming was worth every penny of that fiver, and actually probably a lot more.

“I’ll definitely be keeping some spray in my cupboard in case I need it again.”