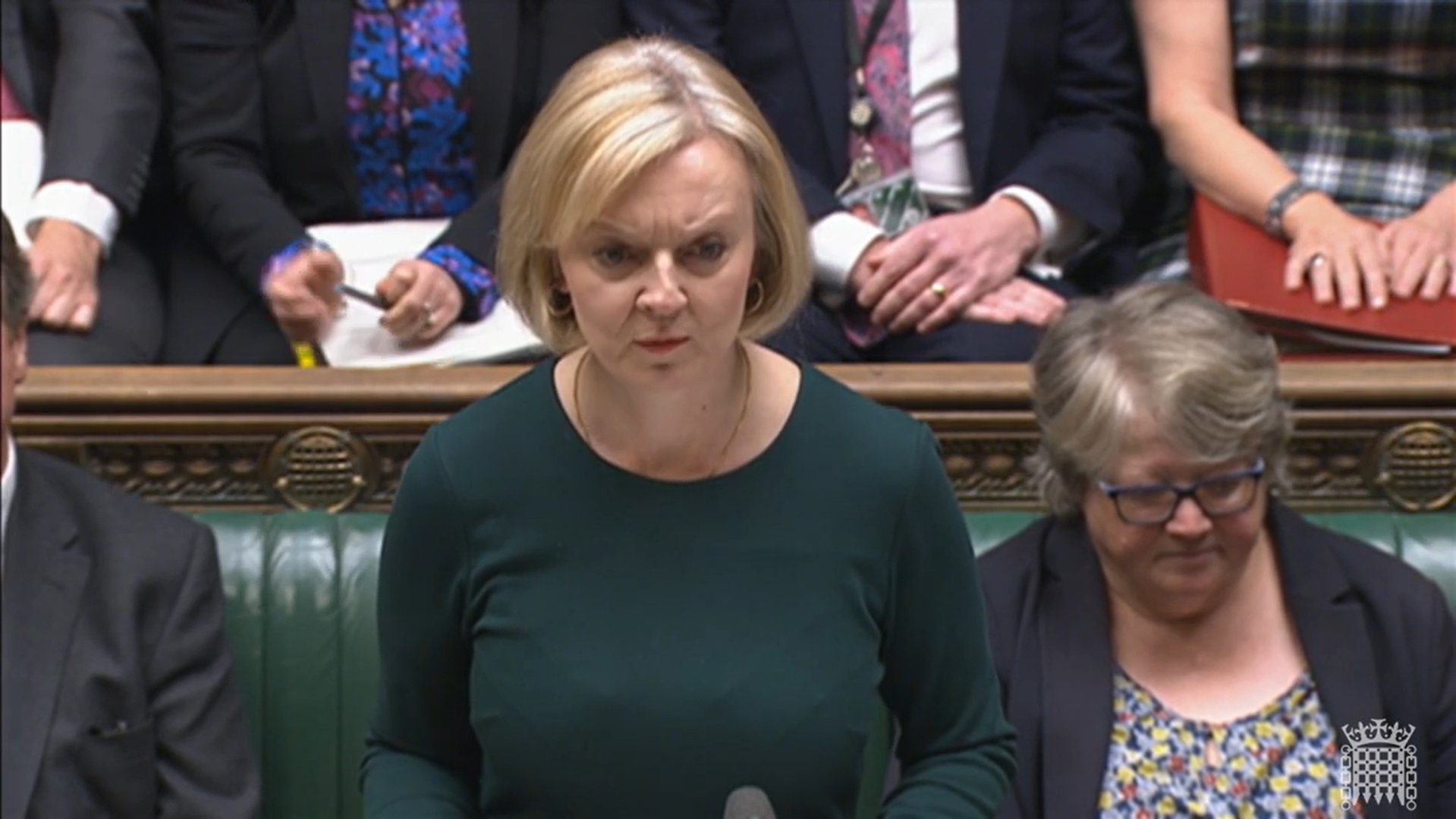 Liz Truss is facing her second grilling from Keir Starmer after weeks of financial turmoil in the wake of her disastrous mini-Budget.

The Prime Minister faced questions from the Labour leader at Prime Ministers Question Time in Parliament, just hours after the UK economy shrunk.

She first told Parliament she would end no-fault evictions, after being asked about the renting issue by Labour MP Graham Stringer.

He said: ‘Can the Prime Minister reassure the 11 million private renters in this country that she will carry out her commitment to get rid of no-fault evictions?’

Her short response left other MPs giggling in the chamber, as Starmer followed up and asked the PM to ‘reverse the kamikaze budget that is causing so much pain’

Truss said she is ‘genuinely unclear’ as to what Labour’s stance is on the energy price guarantee, sparking more chuckles from the back benches.

She added: ‘It was the biggest part of the mini-budget. Does Labour want to reverse it?’

Earlier in the week, senior Tories also warned the PM and Chancellor Kwasi Kwarteng’s economic credibility would be further shredded if Kwarteng tried to push through the disputed mini-Budget policies without the support of Conservative MPs.

It comes as the pound has fallen again, after the governor of the Bank of England warned its emergency support package for the financial markets will end on Friday.

The latest data means the economy is on track to contract overall in the third quarter.

While the PM and Starmer were trying to arrive in parliament, a mob of eco protestors glued themselves to the road outside in a bid to try and delay PMQs.

Just Stop Oil protestors caused mayhem outside of 10 Downing Street, while another bunch of protestors – Insulate Britain – also glued themselves to the road outside of Parliament.

As PMQ’s continued inside the SNP has accused Liz Truss of ‘scapegoating’ the Governor of the Bank of England in order to save Kwasi Kwarteng from the impact of the mini-budget.

SNP Westminster leader Ian Blackford said: ‘When the Prime Minister last stood at the despatch box, the average two-year fixed rate mortgage stood at 4.5%, they are now at 6.5% and rising, hitting average families with an extra £450 a month on mortgage payments every single month over and above what they were paying.

’37 days into the job, this is literally the cost of the Prime Minister’s incompetence. It is the price households are paying and all because of a Chancellor that she chose.

‘Will she now give up her desperate plan to save her Chancellor’s skin by scapegoating the Governor of the Bank of England?’

The Prime Minister replied: ‘The action we have taken has meant that families in Scotland and across the United Kingdom are not facing gargantuan energy bills.’

Ms Truss called on the SNP to encourage the building of more nuclear power stations and more North Sea gas extraction, to ‘help deliver on a more secure energy future for all of our people’.

Blackford replied and said: ‘If she wants to ask us questions, we can swap places.

‘The reality is that the Prime Minister is ignoring the damage and the chaos of the mini-budget.

‘The only thing growing under this Government are mortgages, rents and bills. Is that what she really meant when she declared herself a pro-growth Prime Minister?’

Liz Truss replied that the Government had ‘taken action on helping families heat their homes’ and noted that interest rates were rising globally.

The Prime Minister added: ‘I want to do all I can to help families across Britain and the way we are going to help them is by delivering economic growth by making sure we have the jobs and opportunities in Scotland and right across the UK.’