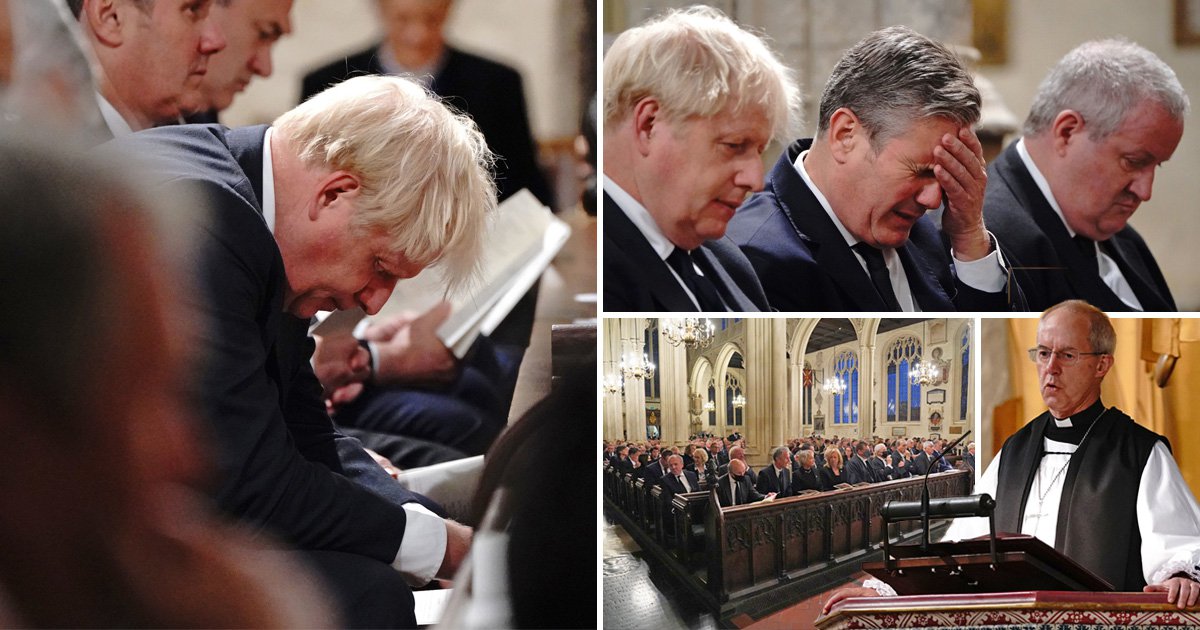 Sir David Amess had a ‘fairness of spirit and charity of heart’ which endeared him to those across the political spectrum, a service in his memory has heard.

Prime Minister Boris Johnson, sitting beside Labour leader Sir Keir Starmer, bowed his head as politicians from all parties gathered at an emotional service at St Margaret’s Church in central London to honour the late MP, who was fatally stabbed on Friday at a surgery for constituents.

They listened as the Archbishop of Canterbury, the Most Rev Justin Welby, said there is ‘a unanimous conviction amongst all who knew him’ that Sir David had been ‘of the best’.

Mr Welby told the congregation the ‘light lit by public service’ provided by MPs like him ‘must never be put out’.

A sombre procession of about 800 MPs and peers, dressed in black, filed into the church beside Westminster Abbey on Monday, following an afternoon which saw tributes paid in both the Houses of Commons and Lords.

It also saw Southend granted city status as a moving tribute to Sir David, who led a decades-long campaign for the move for the seaside town until his murder.

Mr Johnson announced the move as he led passionate cross-party tributes in the Commons to one of the ‘nicest, kindest and most gentle’ MPs.

Earlier today, Sir David’s heartbroken family visited a memorial outside the church where he was stabbed to death.

During the service, Mr Welby described Sir David as having ‘a robust fairness of spirit and charity of heart that won the admiration and affection of all sides, regardless of whether they agreed with him politically or not’.

He said the late MP will be remembered alongside other politicians who have been killed in recent decades, adding: ‘He was of the best, and his name will be remembered with Airey Neave, Robert Bradford, Anthony Berry, Ian Gow and Jo Cox, those MPs murdered since 1945, and others, like Andrew Pennington, who have died in the course of public service.

‘Public service in politics is a sacrifice that should be honoured and respected, even when differences of opinion run very deep indeed.’

The archbishop said Sir David’s political service was inspired by ‘his strong personal faith’, describing him as a man of deep Catholic Christian faith.

He said: ‘The light that David held out through his service, inspired by his strong personal faith, that light held by all in public service, may flicker but it will not be extinguished.

‘In the face of mindless injustice, we determine to shine it all the more brightly.’

The service of remembrance saw prayers offered for Sir David, his loved ones, and those who ‘feel vulnerable in public service’, with a hope for ‘peace in our land and an end to rancour and the threat of violence’.

The Reverend Anthony Ball, Canon of Westminster and Rector of St Margaret’s Church, prayed for ‘courage and strength’ for all those affected by Sir David’s death, and spoke of the MP’s ‘kindness and commitment’.

Other prayers at the service referenced causes close to his heart, including supporting those living with disability, the humane treatment of animals, and for decency in public life and discourse.