A pair of childhood sweethearts have officially become Mr and Mrs White-Christmas after getting married before the second coronavirus lockdown came into force in England.

Tilly Christmas, 21, said her new husband, Keiran White, 20, literally “fell head over heels” for her when they first met when they were both 12.

She said: “He actually fell over and head-butted my feet. After that, we became great friends and eventually boyfriend and girlfriend.” 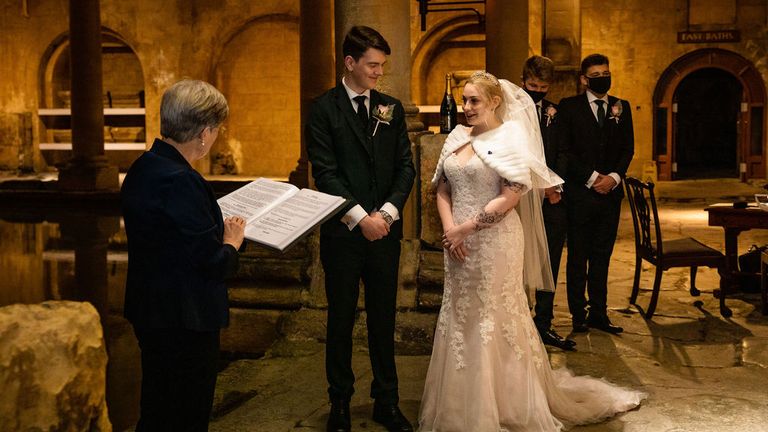 Tilly also revealed it took them “time to twig” that together their surnames had a festive feel.

She said: “We first realised at our secondary school prom when our friend uploaded pictures to social media using the hashtag #WhiteChristmas.”

She added that she wanted to keep her unusual surname “for a few reasons”.

“It’s a surname I have grown up loving and I wanted to keep the name going,” she said. “It just so happens the man I am marrying has the perfect surname to go with it.”

The couple, from Bridport, Dorset, married at the Roman Baths in Bath on Tuesday, in a COVID-secure ceremony, with just a small number of close family members and friends – followed by a reception for 15 guests at the venue’s picturesque terrace.

Mrs White-Christmas, a business student, said the couple had been due to get married at another venue in July, but like many other couples, had to move it back due to the outbreak.

She continued: “To cheer ourselves up, we decided to look for another place with a real wow factor for the rescheduled ceremony and fell in love with the Roman Baths as a venue.”

Paul Crossley, from Bath and North East Somerset Council, said: “On behalf of the council, our registrars and the team at the Roman Baths, I want to pass on our heartfelt congratulations to the new Mr and Mrs White-Christmas.

“They made it just in time to get married before the latest restrictions and we were delighted that they chose the Roman Baths.”