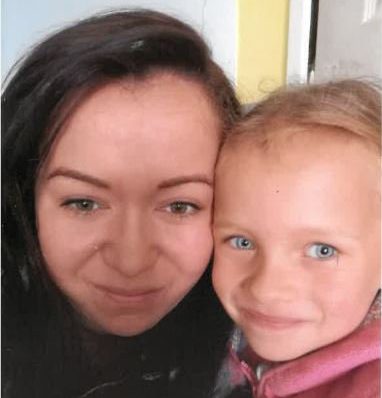 Tributes have been paid to a mum and daughter described as ‘angels’ who were killed on their way to nursery yesterday.

Justyne Hulboj, 27, and four-year-old Lena Czepczor were walking in the Sheepscar area of Leeds when an Audi mounted the pavement and smashed into a Jaguar car dealership.

Police said the car had been travelling in convoy with a grey BMW 135i before the collision. Three people have now been arrested.

‘May you both fly free in eternal love. You will both be missed.’

‘The little girl goes to my daughter’s school and sometimes she goes to breakfast club [with her]. She has been so sad about this.’

While a second wrote: ‘Condolences to the families of the mother and her daughter. RIP.’

Emergency services rushed to the scene on the A61 Scott Hall Road at around 8.30am.

Both were pronounced dead a short time later, a force spokesman said.

The driver was taken to hospital with non-life threatening injuries.

Distraught families last night told how their children had watched the horror unfold.

One parent said: ‘My son witnessed it waiting for the bus to school.

‘He’s shaken up. I managed to go pick him up before the road was closed and brought him home.

‘Just seeing the state of the car made me feel uneasy so can’t begin to imaging what it’s done to him seeing it.’

Another said: ‘Just had to pick my son up, he witnessed it.’

A traffic officer told shocked onlookers it was the worst scene he had ever attended.

Two men, 26 and 34, were arrested on suspicion of two offences of causing death by dangerous driving and remain in custody.

A 65-year-old woman was arrested on suspicion of assisting an offender. She has been released on bail.

Detective Inspector Paul Conroy said: ‘This is an absolutely tragic incident, and we are working to support the family of the woman and child involved.

‘We have already spoken to a number of witnesses but are keen to speak to anyone else who has witnessed the collision itself or the events leading up to it.

‘We would also ask anyone who was in the area around the time of this collision to check their dashcam footage.’

Anyone with information is asked to contact the Major Collision Enquiry Team by using 101 Live Chat online or by calling 101, quoting log 260 of January 16.