John and Mary Boxer should have been celebrating their diamond wedding anniversary in the past week – marking 60 years of marriage. Their family had planned to hold a big party for all the family. They died of Covid-19 within days of each other.

“They both came from big families and both were one of seven children,” says daughter, Elaine. “Four boys and three girls. Dad worked in telecommunications and mum was a cleaner and then a dinner nanny at Sunderland Royal Hospital.”

The couple had been friends since childhood, growing up in the same part of Sunderland, in the north-east of England.

“My mum stopped work to look after her mum who lived with us and my sister all our lives. My grandmother was 103 when she had to go into a care home after my mum’s hips deteriorated. She was 106 when she died.”

Elaine and her sister Glynis had been planning their parents’ 60th anniversary.

“We were thinking about booking a hall and have my brother-in-law, who is a singer, to perform,” says Elaine. “We knew that my parents enjoyed his singing and would have loved to listen to him sing. But because of lockdown, we put our plans on hold.” 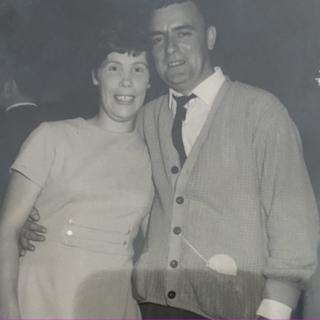 On 10 April, John fell ill and was taken to Sunderland Royal Hospital, the same hospital his wife had worked in. It was Good Friday. Staff found nothing wrong with him and sent him home.

But on Easter Sunday he returned and the hospital ran Covid-19 tests. On Easter Monday he tested positive.

“The hospital was going to send him home again but when my brother-in-law picked him up, he couldn’t stand up,” says Elaine. “Dad had diabetes and Parkinson’s but he said he felt tired and exhausted.”

John stayed in hospital, but his health deteriorated and on Friday 17 April – seven days after falling ill – he passed away.

“I couldn’t believe it,” says Elaine. “I spoke to him on the [Maundy] Thursday and he seemed fine – he was chatting away and laughing as usual.”

Elaine says Mary, who had been diagnosed with Alzheimer’s, initially found it hard to process what had happened.

“She stopped eating, but we put it down to grief,” says Elaine.

A few days before her dad’s funeral, Elaine went to town while her sister went to see their mum.

“My sister rang me saying that I needed to come over straight away. Mum was distressed and her temperature had risen. She had no cough or other symptoms to do with Covid-19 but her oxygen levels were low.”

Mary went into hospital that afternoon, where she tested positive for coronavirus. She was kept in hospital and the family was able to see her via a video call.

John’s funeral was held on Saturday 2 May at St Hilda’s Roman Catholic church, in Sunderland – but only seven people could attend.

“It was me, my partner, my sister, my brother-in-law, my dad’s oldest brother, my cousin and his wife. We all had our phones switched to silent,” Elaine says.

“After the funeral, we went back to my sister’s. My brother-in-law checked his phone and saw there were missed calls. He rang the number and was put through to the hospital ward. He told my sister what the hospital said.”

“We both fell in each other’s arms and started crying. We knew mum was poorly and due to her age there wasn’t much they could do. But it was a shock that it happened on the day of dad’s funeral.

“There were tears and sadness, but my sister and I went into automatic pilot. We rang around to let the family know. We also called the priest and he said that the church held prayers for mum earlier that day.

“We called the funeral directors we had just left – they couldn’t believe what happened either.”

Mary’s funeral was on VE Day on 8 May. By that time, the rules on funeral attendance changed. Sixteen people were allowed at the funeral and it was played over the internet for friends and family.

“Mum and dad both have big families and I feel they were cheated from funerals they would have had,” Elaine says.

“Mum and dad loved each other very much and they would do anything for one another. If one was in hospital the other would constantly be by their side.

“They enjoyed their holidays. For their 40th wedding anniversary they went to America and had a wonderful time in Florida and Las Vegas.”

The family is now planning to celebrate John and Mary’s lives next year. “We were going to have a big celebration for my parents’ 60th wedding anniversary and get all the family together. We will have a joint memorial for them later in the year.”

“We need some closure,” Elaine adds. “The small comfort we have is that they are together again – they were always together.”