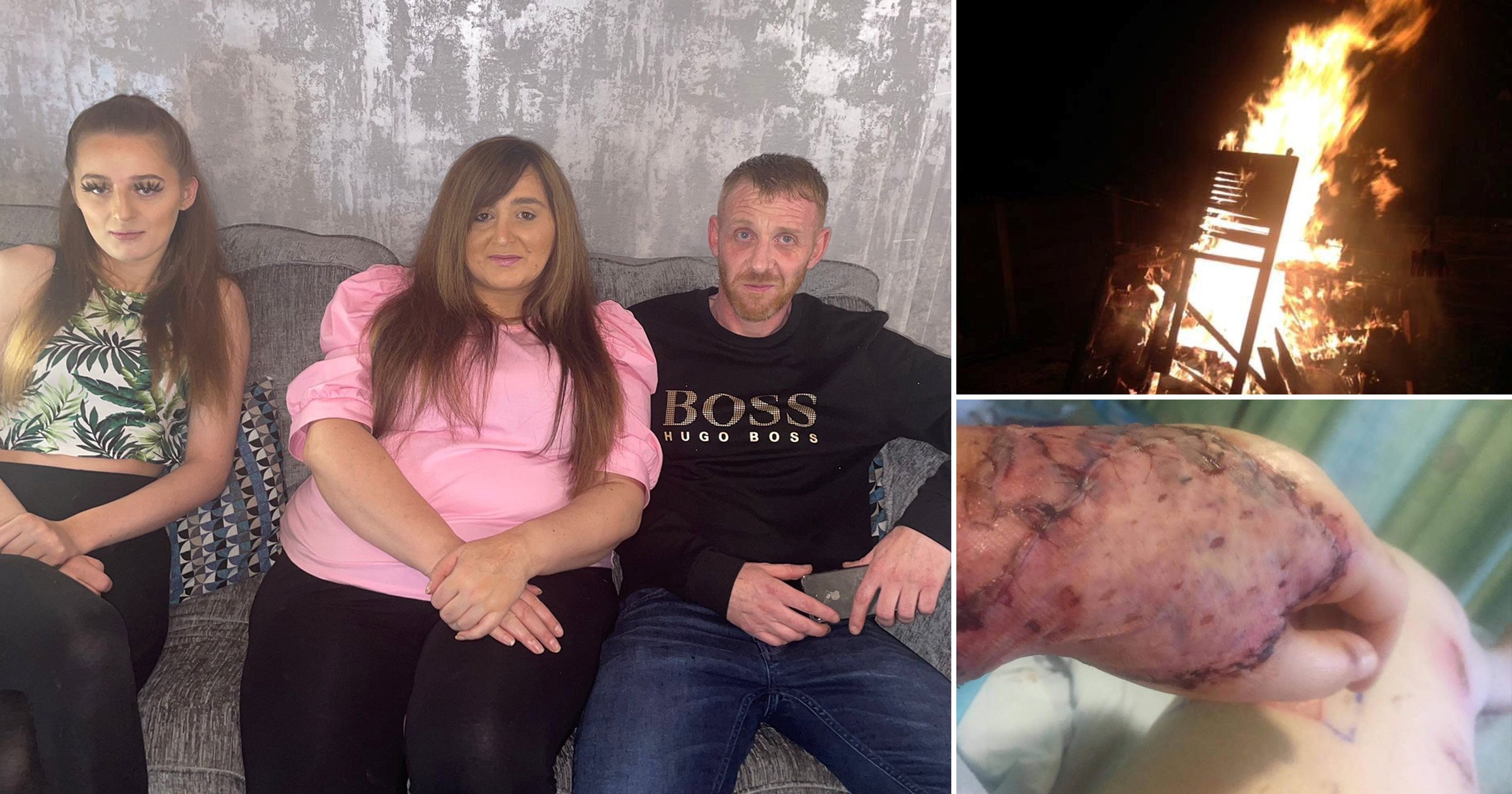 A mother could have died after she set her entire lower body on fire in a terrifying bonfire accident.

Louise Chadwick, 39, had been renovating her daughter’s bedroom and had ripped out the wardrobe in order to burn it in the garden.

She took it outside and poured petrol on it, thinking she would then burn it, but didn’t realise that her daughter’s ex-boyfriend Jamie, then 17, who had been helping her, had already got the fire going.

The bonfire exploded and the petrol immediately caught fire, including the fuel can she was holding.

As she dropped it on the floor, she slipped and spilled petrol on herself, which also went up in flames.

Her entire lower body was immediately engulfed in flames and the burning petrol that drenched her clothes was slowly starting to creep up her body.

Mum-of-three Louise, from Radcliffe in Manchester, said: ‘At first I was in complete shock.

‘Everything happened so fast from the moment I poured the petrol to the horror that came afterwards.

‘My arms went up first, but things really got serious when I slipped and drenched myself in petrol fluid.

‘That’s when my leggings set alight and the flames started to rise up towards my torso.

I could feel the heat quickly nearing my face, but I couldn’t get my trousers off because I was wearing my partners slippers.

‘Jamie was trying to help me get them off but he was in complete shock at what was happening.

‘It felt like I was burning for a lifetime, and I genuinely thought this is how my life is going to end.’

After five minutes, she finally managed to extinguish the flames on her clothes and skin with the help of her daughter Georgia Mulvey, 19.

She came rushing downstairs after hearing her mum’s screams, and filled up several jugs of water to frantically throw over her.

Eventually, Louise’s clothes were wet enough to stop the burning and she was able to briefly escape the torture she’d just endured.

However, the aftermath of the accident proved equally horrific as Louise realised the severity of her burns.

She had to be airlifted to hospital and spent the next two weeks in intensive care, with third degree burns all over her lower body and arms leaving her in need of a skin graft.

It took over a year for her burns to heal, but the physical and mental scars she has will stay with her forever.

Shortly after the accident in 2017, Louise was diagnosed with PTSD.

She now has an extreme phobia of any kind of open flame – making fireworks and Bonfire Night a terrifying occasion, though she is trying to face the fear ‘head on’ to be able to enjoy them with her grandson.

‘Every day that goes by I still think about what happened,’ Louise said.

‘The scars on my body have healed as much as they ever will, but it’s my mental health that’s been damaged the most.

‘The first time I went to fill my car up since the accident I started screaming in the middle of the petrol station – in that moment I felt so much fear.

‘I’ve had countless nightmares where I’ve woken up thinking I was burning and my kids have had to come in and calm me down.’

Since her accident, Louise has retrained as a hair and make-up artist and aims to help burn victims feel happy with their appearance.

She recently gained her industry qualifications with the help of her daughters, and can’t wait to see where her new career take her in the future.