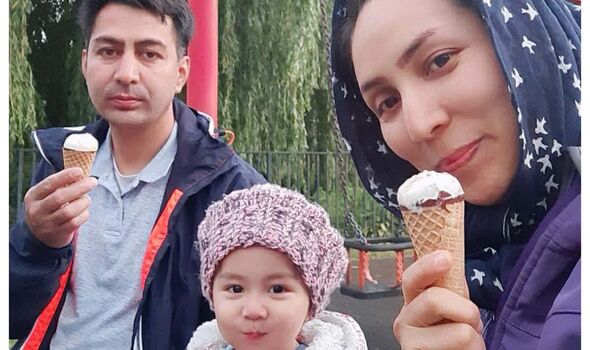 A mother, who was once forced to make the hellish crossing over the Channel herself, has spoken out after the death of four boat migrants. Sharing her harrowing story, Najma Ahmadi is begging the Government to offer refugees the chance of a better life – without ­having to put themselves in the hands of callous people smugglers.

Her plea came just a week after the refugees died crossing the icy Channel in a migrant boat.

Speaking to the Mirror, she said: “When I heard about the deaths I thought that could have been me. The sea does not joke with ­anyone – you can drown at any time. People who cross the Channel are making a choice – on one side is death and on the other side is a better life. I don’t want any other refugees seeking a better life to endure what I went through. Everyone should have a safe chance at a better life.”

Afghan Najma and her family, part of the persecuted Hazara community, have fled the Taliban.

Grateful Najma, husband Mohammad, both 38, son Maisam, 12, and daughter Majla, two, are spending their second Christmas here – living in a South London hotel and reliant on charity to be able to afford ­presents and decorations. They are Muslims but hope to celebrate Christmas by exchanging gifts and putting up a tree.

Despite the fact that their future still looks uncertain, they are over the moon because last month they were granted asylum in the UK.

She said: “There were 35 of us in a five-metre boat. The weather and the waves were so bad. Most people were praying and I was crying. My daughter was terrified. She was only one at the time and was holding me tight. I felt so sorry for her. I was crying because she was so scared.

“When we finally ­landed I’d been sitting in the boat holding my daughter for 11 hours and I couldn’t move my legs ­because I was so scared. The police put me in a wheelchair.”

However, the harrowing voyage was just the final leg of the families’ 5,000-mile journey for a new life, which began in 2019. They made 20 attempts to cross into Greece from Turkey and twice Najma, expecting Majla, nearly drowned. She said: “The first time our boat sank it happened just after we set off.

“Because I was so heavily pregnant I couldn’t get up. Two of them hit the back of my stomach, they hit me twice saying: ‘You need to go up, go up’. I heard many times about boats ­sinking. But it made it very real. I saw death.”

Najma gave birth to Majla just a few days after finally making her way to Greece. She said that compared to the refugee camps in Greece, which had no electricity, their South London hotel was good.

This week the High Court ruled the Government’s ­controversial plan to deport migrants, including those who reached the UK after crossing the Channel in small boats, to Rwanda was lawful. However, the High Court ruled in favour of eight asylum seekers, finding the Government had acted wrongly in their individual cases. Labour has branded the policy “unworkable” and “unethical”.

Shadow Home Secretary Yvette Cooper said Labour would work more closely with France and set up a major new unit in the National Crime Agency to go after the criminal gangs who charge refugees thousands to make the dangerous journey to the UK, rather than “wasting money on Rwanda schemes”. She said: “There have been six Conservative Home Secretaries and eight Immigration Ministers in seven years.

“Their lack of grip has led to this chaos.

“We need hard work not rhetoric before more lives are lost.”

A teenager charged over the boat tragedy that killed four ­people has been ­remanded in custody and is due to appear at Folkestone ­magistrates court on Monday.