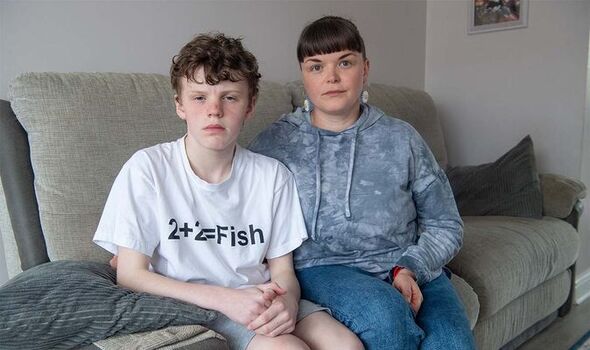 Samantha Bowe’s son Charlie, 12, has spent six months out of the classroom after leaving his previous secondary school, just weeks after joining Year 7. According to his family, staff at the school just couldn’t meet his needs.

However, despite leaving the school, Charlie technically remained on roll for several months afterwards. His last lesson there was in October and he had no work given to him at home. As Samantha, 32, explained when speaking to StokeOnTrent Live: “It was affecting his mental health. He was really upset.”

After lodging a special needs tribunal, she was relieved to be offered a place at Abbey Hill School in Meir, Stoke-on-Trent, where Charlie started last week.

“It’s the best place for him,” Samantha added.

Unfortunately, Samantha has been forced to give up her job so she can drive him from their home to the special school four miles away. She says Stoke-on-Trent City Council has refused to provide school transport. Instead, officials offered the family a personal budget of £15.38 a day to sort out taxi arrangements themselves.

“I started ringing round taxi services and they were all saying they couldn’t take him,” said Samantha.

“Either they didn’t do school runs, they were fully booked or they said he was too young to take without a chaperone.

“Even if they could have taken him, I was getting quotes off some of them of £50 a day.”

She discovered another Abbey Hill pupil, who lives in Staffordshire County Council’s area, qualifies for a minibus to get to school and travels through Trentham.

But as this transport is arranged through a different local authority, they can’t use a spare seat on it. Samantha has to drop off seven-year-old son Mason at Ash Green Primary Academy, in Trentham, Stoke-on-Trent, before taking Charlie to school.

He is now regularly arriving late for lessons at Abbey Hill. “It’s taking me an hour on the school run in the morning and an hour in the afternoon,” his mum added.

Samantha’s boss at a cookware shop even contacted the council on her behalf.

They said: “The local authority just said my boss needed to be a bit flexible. It made us laugh as you can’t be flexible in retail. We are only a small staff.”

Although the job is still available if she can sort out the school transport, Samantha is currently out of work. And as she is appealing the council’s transport decision, she has had to turn down the personal budget, so is funding the fuel costs herself.

It is just the latest in a series of battles to ensure Charlie gets the support he needs. As well as autism, he has learning difficulties and has the reading age of a six-year-old.

“We waited three years for his autism assessment. He finally got it this year,” said Samantha. She says it also took three attempts to get an education, health and care plan.

She fears the transport request was rejected ‘because of council cutbacks’. The city council has faced growing pressure on its special needs transport budget in recent years and stopped funding post-16 transport for affected students in 2020.

Councillor Janine Bridges, cabinet member for education, said: “We are sorry to hear Mrs Bowe is unhappy with the travel assistance we have provided. The city council offer travel assistance to enable children who meet certain criteria to get to school.

“Mrs Bowe was offered a personal travel budget to subsidise her child’s travel costs. We outlined to Mrs Bowe that she could appeal this decision and the case will now be reviewed further.”