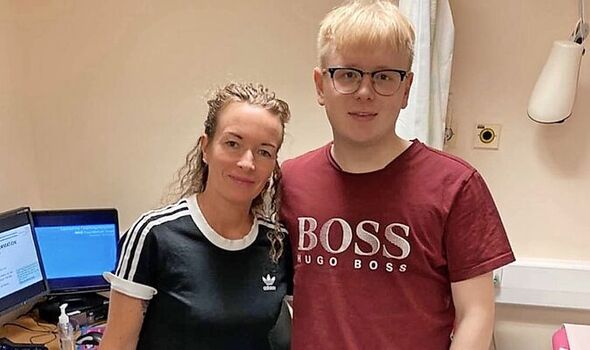 She knew Ethan risked not finding one while waiting on the national transplant list, so she took matters into her own hands. Joanne posted on Facebook asking if anyone could help her son – and her plea was seen by mum-of-three Dawn Kingston.

Dawn, 45, who lives in Blackburn with partner Ian, 47, a drayman, was a complete stranger to the Green family. Yet she didn’t hesitate in stepping forward to save Ethan’s life. She offered to donate her own kidney to him and the transplant took place last year.

Joanne, 55, who lives with husband Colin, 56, in Burnley, said: ‘We can’t ever thank Dawn enough for coming forward. She was a complete stranger and yet she underwent this risky surgery to save him.

“She has given him his life back. He’s travelling the world which he never could have done before. The world is his oyster.”

When he was born, Ethan, now 24, was diagnosed with polycystic kidney disease.

Joanne said: “I had my last scan when I was 32 weeks pregnant – everything had been plain sailing until then. But they picked up that Ethan had cysts on his kidneys. It was devastating. My husband’s dad had died of kidney disease – it was the same condition.”

Ethan was put on medication to control his blood pressure from the day he was born.

But by 2016 his kidney function had deteriorated to just 30 percent.

When new medication failed to work they told Ethan he needed a life-saving transplant.

Joanne, who also has a daughter Shaunicy, 31, and son Zachary, 28, said: “I have an auto-immune condition which means I was ruled out. So I turned to Facebook for help. We didn’t know what else we could do.”

In January 2019, Dawn spotted Joanne’s plea for help. She said: “I messaged the Facebook page to say I would be interested to help. I had two kidneys and was in good health. I was prepared to give one to him.”

Doctors at the Royal Preston Hospital arranged for Dawn to have a series of tests to see if she would be a good enough match.

The testing process took nearly a year and she met Ethan for the first time in March 2020.

Dawn said: “It was lovely to meet Ethan and Joanne. We got on from the moment we met. The transplant team don’t encourage you to meet up before the transplant in case you get too involved. It was very emotional.”

Covid delayed the operation, but it finally went ahead in January last year. Dawn said: “We were in next door rooms. I felt really calm – I was so certain of my decision.”

She added: “It’s great to see Ethan doing so well. We meet up and go for meals together and Ethan and I got a matching tattoo with the date of our transplant.

“Ethan is a lovely lad. Joanne and I speak and text each other all the time. I may have been a stranger when I gave him my kidney, but we are all like family to each other now.”

Ethan said: “I feel such a close bond with Dawn. It’s amazing she stepped forward and I can’t thank her enough. It’s allowed me to have a second chance at life.”