A woman has been rescued after she got stuck beneath her sofa while trying to ‘pivot’ it down the stairs.

The predicament, captured on camera, was a scene which reminded many of the TV show ‘Friends’.

Melissa, 53, from Ohio in the US, was trying to move her sofa down the stairs with her partner Todd, 55.

But the furniture suddenly got wedged between the wall and the steps, leaving Melissa completely stuck.

Thankfully her daughter Claire, 23, was on hand to film the hilarious ordeal.

In the clip, Melissa’s hand can be seen sticking out from a tiny gap as the stairwell.

Claire, a law student, said the situation was ‘hilarious’ for the entire family.

She said: ‘My parents did not think it was funny. My dad was mad because of the damage and my mom thought she was never getting out. 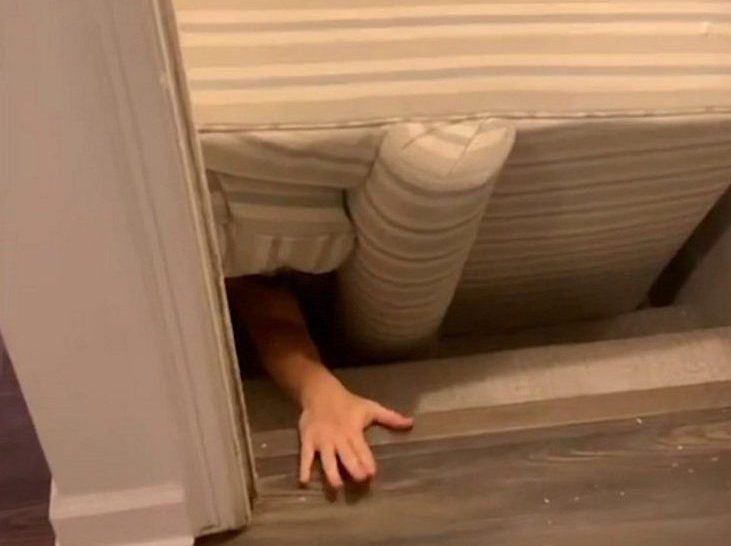 ‘When the fire brigade got there I was really trying to insert myself into the situation, because I have a twin sister and I wanted to film it for her.’

The family had to resort to drilling holes and removing handrails in an attempt the free the pre-school teacher, but even electric drills would not work.

Speaking about the minor damage, Claire said: ‘I don’t think it should be expensive to fix.

‘After the fact, my mum thought it was really funny. We laughed about it afterwards.

‘This was definitely not the typical evening in my house. But there’s definitely a lot of chaos and craziness around.’

Eventually firefighters were called, and they were successfully able to free Melissa from her trap.

Viewers flooded the comments with references to hit TV show Friends, with some commenting, ‘911, we didn’t pivot’.