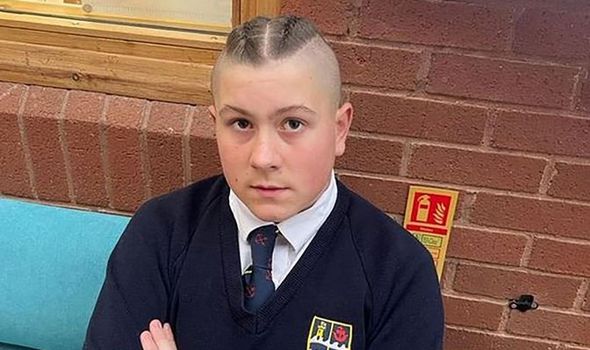 Lealan Hague, 14, has been told by teachers he must wear his hair down because his current look is deemed to be an “extreme haircut”. However, his mum Kirsty is appalled as she feels his haircut isn’t affecting his education.

Kirsty called Exmouth Community College’s decision a “joke” today and claimed her son has had a similar haircut for 11 years.

But Lealan will now spend time in the school’s “reflection room”, which is where pupils continue lessons on their own and have to isolate from their peers.

Speaking to Devon Live, Kirsty said: “He is in top set for basically all subjects so it is clearly not affecting his learning. It’s an absolute joke.

“His head of year said if he had his hair down it wouldn’t be an issue.

“He has had the same hair cut for the past 11 years but he has been told this morning that because it is up today in a plait then it’s an issue.

“We personally think he looks smarter with his hair up than down. He plays a lot of rugby so he had it tied up in plaits over the weekend to keep it out of his face and he liked it so he kept it up this morning.”

He is in top set for basically all subjects so it is clearly not affecting his learning. It’s an absolute joke

Kirsty, from Exmouth, Devon, believes her teenage son has the same right to wear plaits, just like girls do at school.

She continued: “Whether his hair is up in plaits or down and scruffy it shouldn’t make a difference at all. If girls can have plaited hair then why can’t he?

“When he has his hair down, it does not cover the rest of his head so you can still see he has shaved hair on the sides.

“Putting him in internal at school means he has to sit in a room all by himself all day. If he goes to the toilet he has to be accompanied and can only go when all the children are in lessons so he does not be seen.

“He can’t go to the canteen for his lunch; that has to be done for him.”

Ofsted found the large school, which caters for more than 2,250 pupils aged between 11 and 18, “requires improvement” following its last inspection in February 2020.

And when children returned to school following the easing of lockdowns in March this year, Lealan was put in isolation when his haircut – which was done at home due to restrictions – was deemed “too short”.

“As is the case with many other schools across the country we expect hair to be conventional, do not allow students to have a haircut below grade one or to have extreme differences in hair length.

“The issue in this case was not about braiding but was about the fact that the braiding ran in a very small strip of hair across the top of their head, combined with a very close haircut of approximately grade 0, across the rest of their head.

“From what I understand the student in question has previously worn his hair longer and so the shorter nature of his hair on the back and side of his head was not so noticeable.

“We believe that the amount of very short hair at approximately grade 0 has also increased significantly from previously when we were trying to accommodate the situation with the hair left long.

“Like most schools, we try to accommodate a range of hairstyles without resorting to any punitive action. This is usually through discussions with parents and carers about what would be acceptable to both parties.

“When a student arrives at college with an extreme haircut, they are usually placed in our reflection room to continue with schoolwork until parents and carers are contacted and the issue resolved.

“We regret any disruption to a child’s learning of whatever their ability. However, we have repeatedly made our expectations very clear to all students and their families.

“School rules are also an important part of a child’s education which enable them to understand boundaries and consequences as they prepare to make their way in the world.”