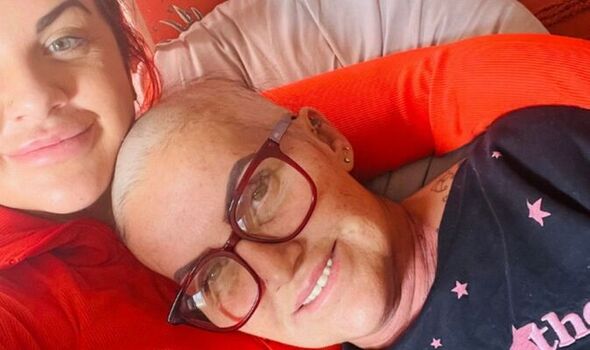 Andrea Fenn, from Wigan, contacted her doctor in May 2021 with concerns over the severe pain in her shoulder and spine. The mum-of-three was told she had frozen shoulder – also known as adhesive capsulitis – a condition that causes stiffness and pain in the shoulder joint.

Her condition worsened throughout last year and although doctors believed she could also have a trapped nerve, no operation, test or medication could determine the cause of her pain.

With her condition deteriorating, she decided to seek a second opinion from a different GP who found that she was suffering from stage four lung cancer.

The devastating diagnosis came after the doctor carried out an MRI scan and found a lump on one of her lungs.

The 52-year-old has now said she believes the cancer could have been caught earlier if the doctors had listened to her concerns and taken them more seriously.

She told Manchester Evening News: “I feel like I’ve been fobbed off.

“I was on the phone to the doctors regularly, at least once or twice a week. The pain was excruciating and on one particular day in September, I was literally on my knees clinging to my boyfriend’s waist saying someone has got to help me.

“I was going to bed hoping I wouldn’t wake up. They told me there was nothing else they could prescribe for me painkiller wise. I called up the next morning and insisted on a second opinion”.

She said that getting a diagnosis for cancer “never crossed her mind” as she just presumed it was a problem with her shoulder.

Andrea said: “If someone had listened to me, I possibly wouldn’t have been stage three.”

The family received more devastating news after she had begun chemotherapy and immunotherapy treatments, when she found a second lump in her stomach.

The next day, she visited The Christie cancer treatment centre in Withington, where the doctors tragically diagnosed her with a secondary cancer in her stomach.

She said the family were “shocked” with the diagnosis as they were told the lump was caused by the injections she had received during her treatment.

Andrea said: “It’s devastating. I’m trying to keep my chin up and be brave”.

“My youngest son doesn’t know the extent. He’s only 11 and he just knows mum has cancer but the two older ones obviously know. It’s crushing; it’s awful”.

Andrea’s daughter, Tara Fenn, told the paper: “During the MRI scan they totally missed it. It was the second opinion that allows us to find out it was cancer, but by the time we found out it was stage three.

“If she decides not to take treatment, she’s been given six to 12 months to live. It was a shock; it’s not nice for anyone to find out their family member has cancer”.

She said the family were optimistic until they found out what stage the cancer was and they were told it is incurable.

Tara said: “I get upset whenever I talk about it. She has three kids and she hasn’t cried once in front of any of us. She’s so strong.”

A fundraiser has been set up to help Andrea and her family create as many memories as possible during the time she has left.